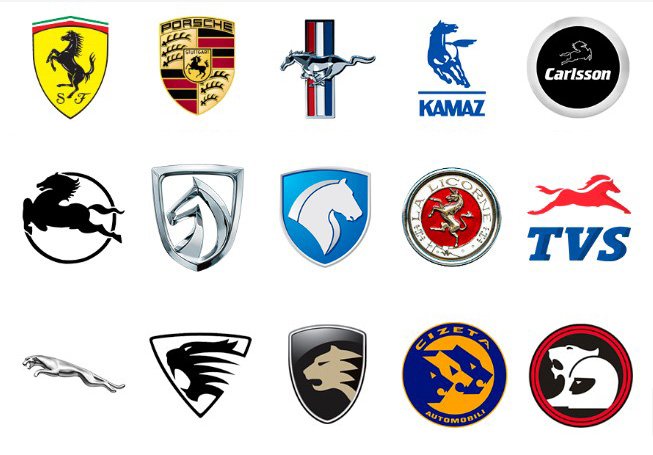 Why do carmakers use animals on their logos? That’s not because they are cute, right? One of the reasons is that each animal introduces a variety of symbolic meanings and associations. In this way, it helps to represent the car brand’s core values.

The horse appears on car logos more often than any other animal. Its speed, striking beauty, and freedom are the reasons enough.

The wings of the griffin promise supernatural speed and freedom. Also, the mythological creature adds the concepts of power, heritage, and royal status.

Similar to the horse, the leopard is an incredibly beautiful and fast animal. The aggressive character, which is emphasized by its open mouth and fangs (optional), comes as a bonus.

As a long-standing symbol of all things royal, the lion is used to emphasize such themes as the status, noble character, and prestige. And yes, like the leopard, it can add an aggressive streak to the overall impression.

While there’re quite a few fast animals, none of them can travel as far and free as the bird. That’s why this creature can be seen on car logos often.

One of the oldest and most popular mythological themes, the serpent has a lot of possible interpretations. Some of them include immortality, continual renewal of life, transformation, and healing.

The eagle is used for the same reason as any bird – to bring about the ideas of freedom and speed. In addition to these, it also conveys status (the king of birds), aggressiveness (the claws and beak), and power.

The wolf is a more unique and rarely used symbol of speed, aggressiveness, freedom, and wild character.

The bull is an excellent way of representing the power and wild, independent character.

In addition to the power, the ram emphasizes the car’s ability to move forward no matter what obstacles it meets on its way – the idea represented by the strong horns.

The dog is an unusual and rarely used symbol for car logos, so it makes the design unique and recognizable.

While the deer is as good at representing speed as the horse, it is also somewhat fragile. This can be one of the reasons why it doesn’t appear on car badges that often.

One way of making a logo stand out is to build it around a creature rarely used by competing brands – the approach used by Abarth, Wiesmann, Intermeccanica, and Morris, to name just a few.

Top Tips On How To Deal With Your Old Useless Car