lo” is supercar produced by the German company “Gumpert Sportwagenmanufaktur GmbH,” whose headquarters are located in Altenburg. The main feature of these cars is unmatched speed.

These are racing cars allowed for driving on general-purpose highways. The shield is on the logo of “Gumpert” in the upper part of which there is an inscription “Gumpert” and the remaining space is occupied by a griffin on a red field. The red area of the shield is framed by a light brown border.

The designer of cars «Gumpert Apollo» was the founder of the company – Roland Gumpert. Accordingly, the logo was also created by him in the process of developing a general design concept for the first supercar brand.

From the automotive industry, the presence of a shield as a logo is a safety for the driver of the car and passengers. Such an emblem for “Gumpert Apollo” is quite suitable, because the developers were not only thinking about high-speed devices but also ensuring maximum and uncompromising security. 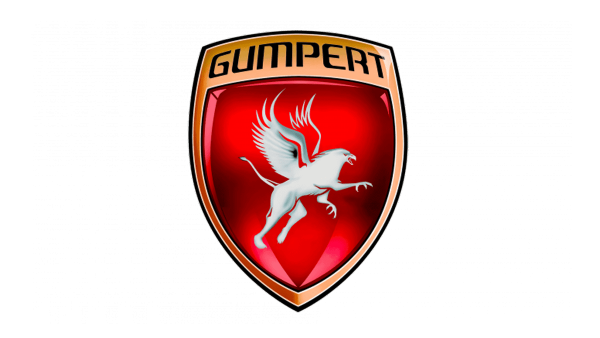 The original Gumpert logo, designed for the automaker in 2004, has stayed unchanged for the decade, and was only replaced by a new one in 2016, when the company got it complete rebranding. The badge featured a classy and elegant wide crest with the sides arched from the center, and the top line flat and clean. The background was set in glossy red with some orange gradients, supported by a sleek orange shade of the wide frame. The black uppercase “Gumpert” inscription was written across the top part of the logo in a fancy futuristic sans-serif. As for the main element of the logo, it was a white griffin, a creature with the body of a lion, and the head and wings of an eagle. 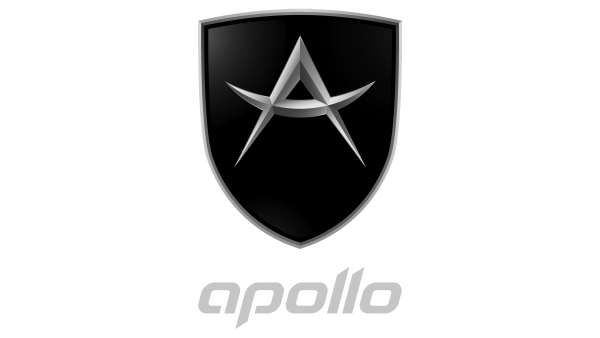 The Gumpert company stopped existing in 2016, but not completely. It was simply renamed, and changed its specialization. Now the automaker’s name is Apollo, and the new logo was designed for the new marque. The Apollo badge is also a crest, but in a more minimalistic shape, with the matte-black background and a thin silver outline. The only element on the crest is a stylized letter “A” drawn in three three-dimensional silver lines resembling three knife blades. The crest is accompanied by a bold uppercase logotype, written under it in a heavy italicized sans serif font, in light gray.

In addition to all of the above, one entertaining fact should be mentioned. According to myths and legends, the griffon often preferred to choose horses as horses. Perhaps the designers did not even think about such a component of this logo, but such a link is pretty obvious and witty. 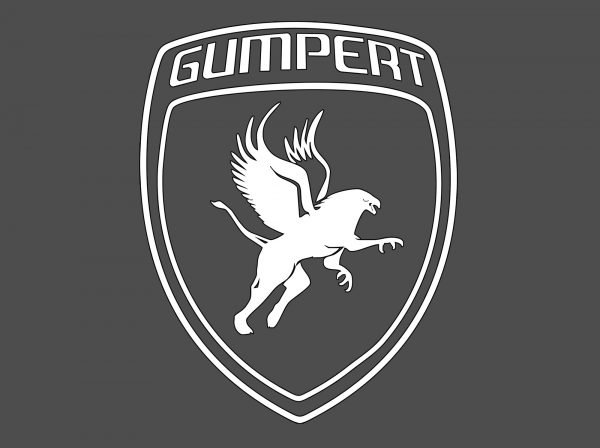 The symbol of the logo is the griffin standing on its hind legs. This mythical being is the embodiment of strength and unruliness. Few can compete in power and agility with a griffin.

The presence of a majestic and formidable bird indicates that cars of the brand “Gumpert Apollo” are created to win. They are created to be the first in everything. Also, it should be mentioned that the griffin is not only graceful but also of natural grace. This can also be said about the car on whose logo it is depicted. The car looks simply awesome and at the same time can boast of excellent maneuverability, both on the race track and on the motorway.

At the top of the logo, there is an inscription “Gumpert” It is written in large Latin letters. It is noteworthy that the inscription is located just above the griffin. Thanks to this, it was possible for the designers to emphasize that all the strength, agility and speed of the griffin are only a part of the cars of this brand.

Letters are black. If you go deeper into the study of heraldry, the black color symbolizes caution, wisdom, and constancy in trials. All this is inherent in cars that are manufactured by the company “Gumpert Sportwagenmanufaktur GmbH.”

In addition to black, the logo consists of the following colors:

To date, the automotive industry produces 21 cars on the logos of which there is a horse. But especially one should pay attention to one of the competitions when on the track came “Ferrari 458 Italia” and “Gumpert Apollo.”