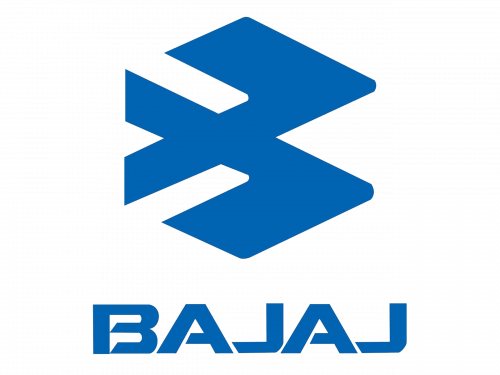 Bajaj is the name of one of the most famous Indian motorcycle manufacturers, which was established on November 29, 1945, and was originally called M/s Bachraj Trading Corporation Private Limited. The company is known as a manufacturer of automobiles and vehicles. The Bajaj range includes cars, scooters, mopeds, and other motorized vehicles.

Initially, the company only sold foreign 2-wheeled and 3-wheeled wagons in India. In 1959 the company began to produce such wagons itself. In 1970 the company produced its 100,000th carriage, and then the production output increased considerably and in 1977 alone 100,000 carriages were produced. In 1986, the production of wagons had increased to 500,000 units per year.

In 1986 commercial production of the 100cc motorcycle has begun. Kawasaki Bajaj KB-100 in collaboration with Kawasaki Heavy Industries.

In 1991, the Kawasaki Bajaj 4S Champion motorcycle with a four-stroke 100cc engine producing 7 horsepower makes its debut. In the same year, an agreement is signed with a Japanese company to develop diesel engines for three-wheeled vehicles.

In 1999 there is born Kawasaki Bajaj CBZ, the result of joint efforts of Indian and Japanese engineers. The bike at the time was the most expensive and luxurious in its price category, and customers gradually began to get used to the fact that Indian machinery can also be prestigious and of high quality.

In 2000, the company had already introduced 17 new models of motorcycles. Most of the models didn’t feature any incredible power, only appearance, which worked on the company’s image.

In 2003, the popular Pulsar 150 and Pulsar 180 models appeared. The Pulsar was followed by even more stylish Discover and Boxer models.

In 2005, the company was included in the list of 2000 largest companies in the world according to Forbes Global, but in 2010 this figure could not be kept.

Today the company exports its products to other countries and the demand continues to grow, due to low prices and acceptable quality. 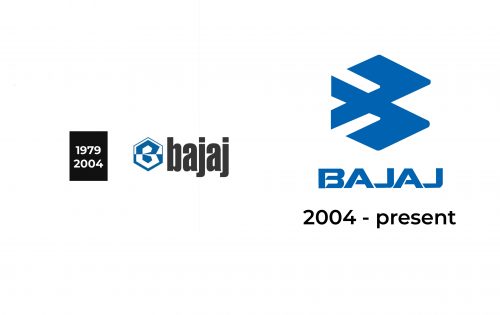 Bajaj is alone if the brands, which prefer consistency and stability in everything connected to their visual identity. The logo of the company was changed just once, keeping the idea of the original version, and elevating it according to the new trends in the world of design. 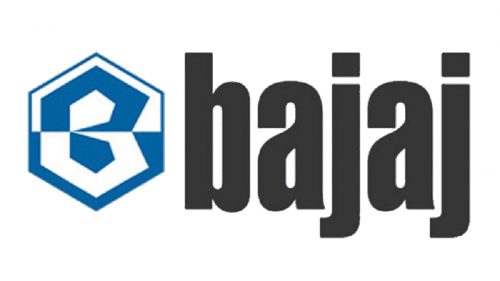 The logo for the Indian motorcycle manufacturer, created in 1979, featured a composition of an emblem and lowercase lettering, placed on its right. The emblem was a stylized letter “B” drawn in the blue and white color palette and balanced by bold black letters of the inscription.

The Bajaj emblem from the 1980s featured a thin blue hexagonal icon horizontally divided into two equal parts — blue on the bottom, and white on top. The bold “B” was placed inside the hexagon and had its upper parts colored blue, and the bottom one white.

The black logotype was written in the lowercase letters of a narrowed sans-serif typeface with thick lines and clean contours. The use of the small letters made it mmm the whole logo look friendly, though it was stable and professional due to the strict color palette. 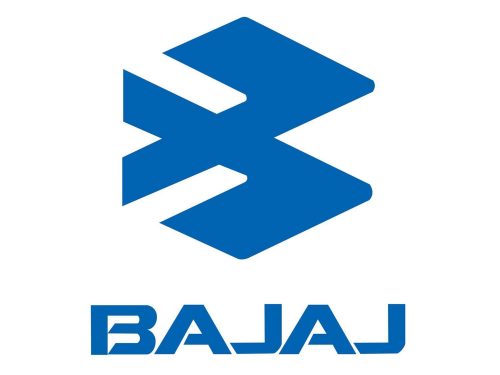 The Bajaj logo was redesigned in 2004, keeping the combination of blue and white as the main theme. The black color was gone from the emblem, which made the logo look balanced and fresh.

Though the new visual identity design is fully based on the previous one, all the elements are modernized and cleaned. The emblem now features a blue stylized figure, while the inscription is set in the uppercase and written in a custom sans-serif typeface with sharp lines and cuts. 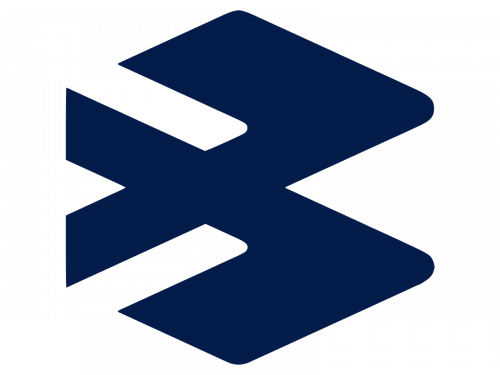 The new Bajaj symbol, designed in 2004, is a stylized letter “B”, formed by two overlapping “ticks” placed horizontally. There is no vertical bar on the symbol, and it makes the “B” look like a bird flying to the right, into tomorrow. The Bajaj emblem symbolized speed and freedom and brilliantly reflects the purpose of the brand and its specialization. 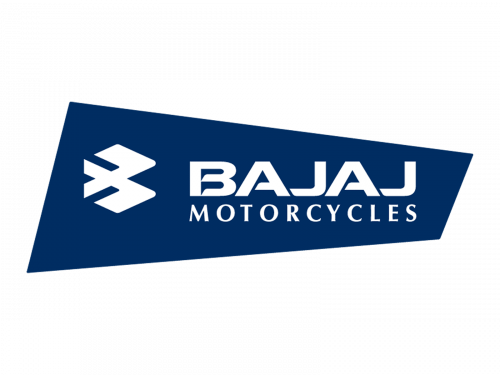 The Bajaj logotype, set in all capitals of a bold custom typeface looks confident and stylish, due to open contours of the letters and diagonal cuts of some bars, which adds sharpness to the inscription, making it more powerful and edgy. The typeface of the Bajaj logo was designed exclusively for the brand, though has something in common with the Corporate URW font, but with the shapes of the letters extended and more square.

The color palette of the refreshed Bajaj visual identity consists of calm and intense blue, which is usually placed on white for better contrast. This palette stands for reliability and safety in the first place, yet also evokes a sense of professionalism and trustworthiness.

Throughout its history, Bajaj has released a bunch of models, which can easily be called iconic and significant. Of the modern models, it is worth noting the flagship in the form of Dominor 400 with a modern look and engine capacity of 35 horsepower and Pulsar NS 200 with an engine capacity of 24 horsepower. In 2015, the company announced the most budget car in the world under the name Bajaj Qute. The model has a four-seat saloon and is equipped with a 217cc single-cylinder gasoline engine that produces 13 horsepower.