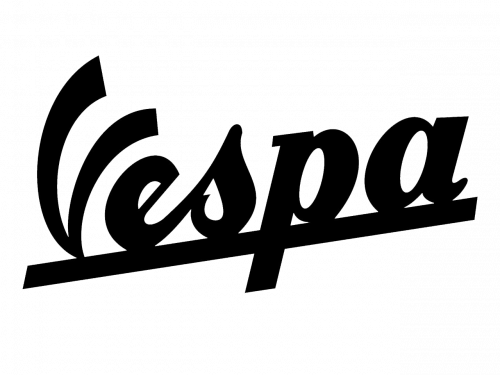 Vespa is a famous Italian brand, created and owned by Piaggio Group. The brand is known for its scooters which have been produced since 1946. They quickly gained worldwide fame, and today they are sold in many countries around the world, being synonymous with the Italian style.

Vespa is one of those iconic brands that has become a true legend. This Italian label has its special style that is recognized as a design classic.

After the war, Enrico Piaggio, son of Rinaldo Piaggio, who founded the famous company, decided to leave the aviation industry to meet Italy’s urgent needs for modern and affordable vehicles.

What is a Vespa?
Vespa is the iconic Italian brand, which is famous for its scooters. As for the name, “Vespa” translates from Italian as “Wasp”. The brand got its name due to the resemblance of the scooters to wasps.

And already in 1944, Piaggio engineers Renzo Spalti and Vittorio Casini developed a motorcycle with a body that completely enclosed the transmission and formed a high mudguard at the front. The design included forced air cooling, small-diameter wheels, and a high center section. Officially known as the MP5 (Moto Piaggio number 5), the prototype was nicknamed Paperino (Italian for “duckling”).

Enrico Piaggio was dissatisfied with the result, especially with the appearance of the MP5, which made him contract another aircraft engineer, Corradino d’Ascanio, to upgrade the scooter.

The engine in the D’Ascanio MP6 was mounted near the rear wheel. This way the engineer got rid of the chain drive and a high center section that Enrico Piaggio disliked so much. When Piaggio saw the updated MP6 scooter for the first time, he exclaimed: Sembra una Vespa! (“It looks like a wasp!”). This is how the iconic name was born.

The MP6 prototype had large grilles on the front and rear of the rear fender covering the engine. This was done so that air could cool the engine.

The first 13 Vespa scooters appeared in the spring of 1946, and their appearance reflected the company’s aviation past. And in 1947 Piaggio sold about 3 thousand Vespa, over 10  in 1948, 20 in 1949, and more than 60 thousand in 1950. The success was obvious. Vespa enthusiast clubs sprang up all over Europe, by 1952 the number of Vespa Club members worldwide exceeded half a hundred thousand.

How much does a Vespa weigh?
A regular Vespa scooter weighs about 110-120kg, which makes it easy to maneuver and ride in the city.

In the 1960s, Piaggio set up the production of Vespa scooters in India, Brazil, and Indonesia. The things of the brand went well till 1999 when Morgan Grenfell Private Equity acquired Piaggio, but due to a failed joint venture in China, things were getting worse and worse for the company. By 2003, the company was on the verge of bankruptcy.

But Vespa got significant investments and in 2004, the company introduced a hybrid gas-electric scooter and a scooter with two wheels in front and one in back.

In September 2018, the production of an electric version of the Vespa Elettrica scooter with a 2 kW battery and a range of 100 km on a single charge was launched. That model was launched on the market at the beginning of 2019. 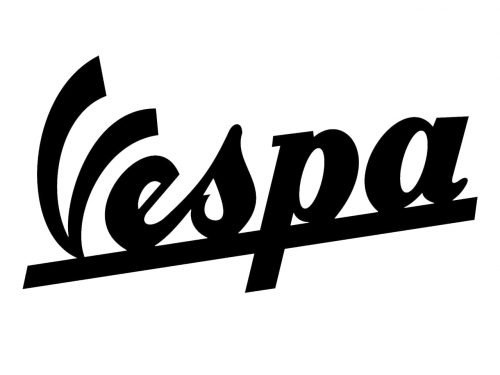 For the first six years of its existence, the Vespa brand was using its mother company, Piaggio, logo — two shades of the blue crest with white lettering. As for the iconic Vespa logo the whole world instantly recognizes some today, it was designed in 1952 and has never changed much since that time. 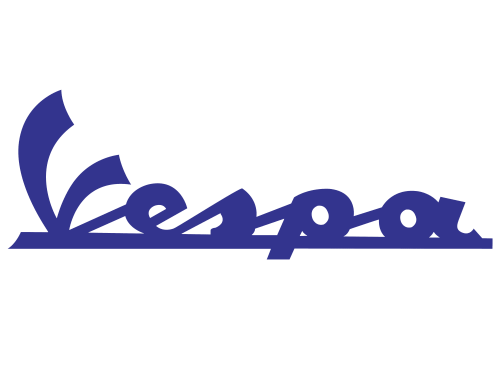 The Vespa logo is a custom script wordmark with a thick underline. The lettering is usually placed slightly diagonally, adding playfulness and a friendly feeling to the brand. The first letter of the logotype has its vertical bars slightly arched to the sides, which makes it look like a wasp silhouette.

As for the color palette, the official Vespa shade is dark blue, a color of elegance and reliability, which look great almost on any background. For the scooters, the logo is executed in silver.

How fast does a Vespa go?
Vespa scooters can go up to 125 km/h, which is more than enough for such kind of transport.

The Vespa Elettrica, with its easy ride, is the ultimate expression of the Piaggio Group’s research into electric mobility. Always an innovator, the Vespa Elettrica continues to evolve with the original version created for purely urban use and therefore homologated as a moped with a top speed of 45 km/h, EICMA 2019 represents the debut of the Vespa Elettrica 70 km/h.