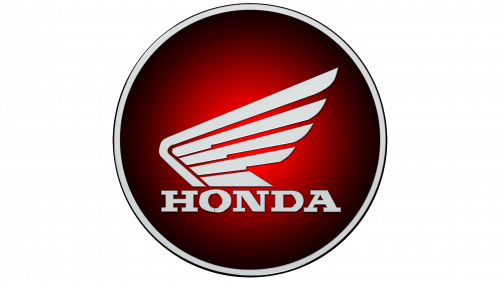 Honda is one of the world’s leading motorcycle manufacturing companies, which was established in 1948 by Soichiro Honda. The Japanese brand has a perfect reputation across the globe and distributed its high-quality bikes all over the world, having its subsidiaries in Europe, North and Latin America.

Where is Honda from?
Honda is a legendary Asian brand, which was established in Japan in 1948 by Soichiro Honda.

Honda was founded in the late 1940s when post-war Japan was struggling to recover from the ruins of World War II. At that time, company founder Soichiro Honda launched a small business producing piston rings, which he sold to Toyota, but a year later began to produce the first inexpensive mopeds.

In 1937 Soichiro Honda opens a company producing piston rings and sells them in 1946. In the same year, Honda starts a new business — installing small and inexpensive two-stroke motors on bicycles, which were used as generators for military radios during the war.

The comoany, which today is known all over the globe, was founded in 1948, and just one year later, in 1949, the first Honda motorcycle was released. The vehicle boasted a two-stroke motor of 98 CC, and got named a “Dream” or a model D.

Who owns Honda?
The brand Honda, known for the production of cars and motorcycles, is owned by Honda Moto Co, along with Acura, another Japanese automaker, which is mainly concentrated on the luxury segment.

In 1953 Model Benly J with a 4-stroke 90 CC engine was introduced. It quickly gained popularity among motorcycle fans and lasted two decades, leaving its memory as one of the most reliable Japanese motorcycles of the 1950s.

In 1958 the international market was shaken by the appearance of the Honda Super Cub model. Its distinctive features are stamped steel frame, lever fork, and four-stroke 50cc motor. Later models with 70- and 90-cc engines appeared. This motorcycle became the world’s most popular two-wheeled vehicle with a motor.

In 1961 Honda motorcycles win complete supremacy in the 125 and 250 CC classes of the Isle of Man TT championship. Team Honda rider Mike Hailwood wins first place in both classes.

In 1968, 19 years after the first motorized two-wheeler rolled out of Honda’s shop, the company produces its 10-millionth motorcycle. 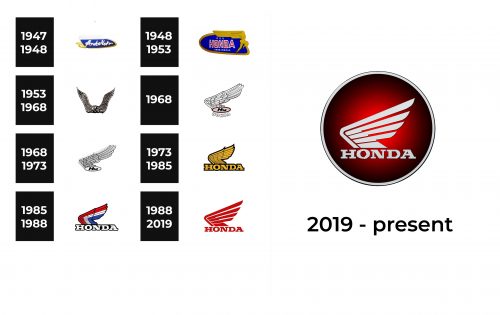 Unlike many other brands, Honda distinguishes its logo depending on whether it is on a motorcycle or a car. The stylized capital “H” on Honda cars are much more boring than the elegant winged “H” from Honda Motorcycles. 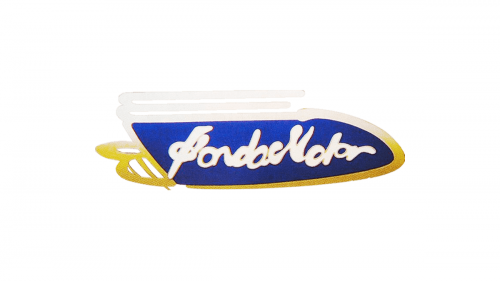 The very first logo for Honda motorcycles was drawn in 1947 and stayed for just a few months. It was a smooth dark blue badge with cursive white and red lettering and some gold decorative elements. 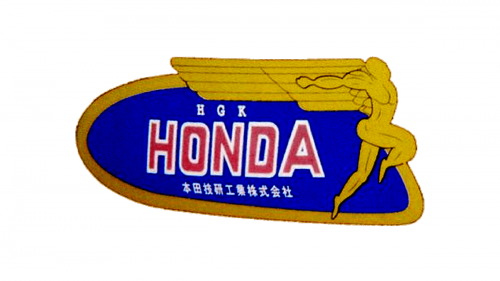 In 1948 the golden-winged man appeared on the badge as a symbol of freedom. The figure was set on the right part of the badge with was now made wider and thinker, having its dark blue shade lightened up. 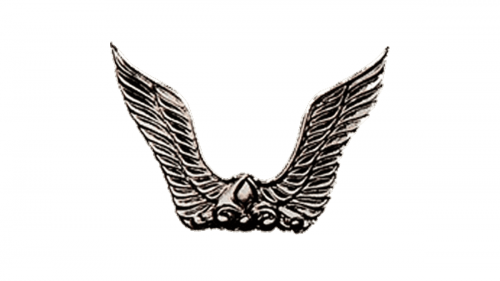 The logo from 1953 featured two stylized wings spread up. It was a very detailed image, which could be seen in dark gray or metal when placed on the motorcycles of the brand. This badge stayed with the company for more than a decade. 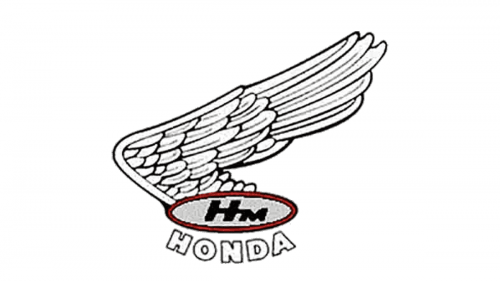 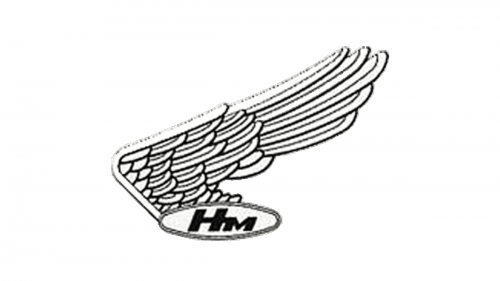 The prototype of the logo we all know today was introduced by the brand in 1968 and changed a little throughout the years. It was one wing in light silver, coming out on the oval badge in a red outline with the black “Hm” lettering on it. 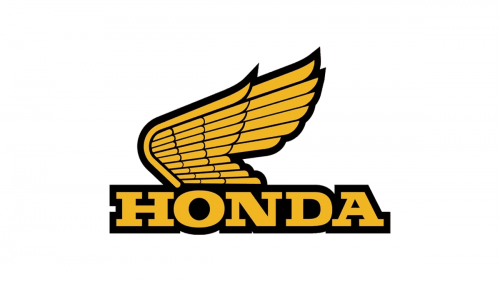 The redesign of 1973 changed the oval into a bold stylized “Honda” lettering in all capitals and replaced the silver color palette with the gold one. The contours of the wing were also refined and now it looked more balanced and sleek. 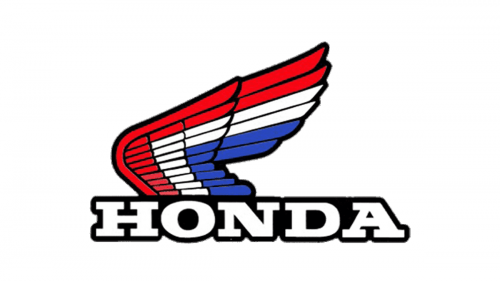 In 1985 the color palette was changed to red, white, and blue, but all the other details remained untouched. Though with the new color the badge started to look differently. Fresher and more modern. 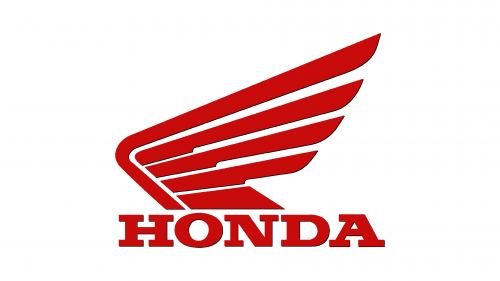 In 1988, the modern Honda logo was introduced. The occasion was the 40th anniversary of the founding of the company. The wing was simplified – it became more iconic and modern. The entire logo has taken on a uniform red color. The outline around the letters and feathers has also been removed. 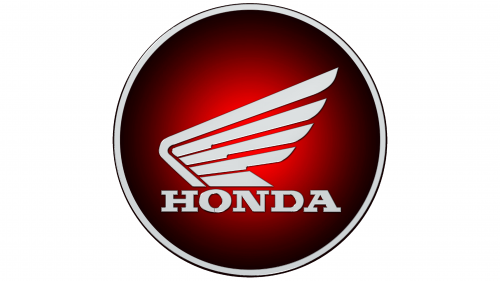 Today Honda motorcycles keep using the badge, created in 1988, though has one more version — the three-dimensional circular badge with a black glossy surface and a silver emblem on it. The most interesting thing about the new emblem is that the wing is turned to the right. 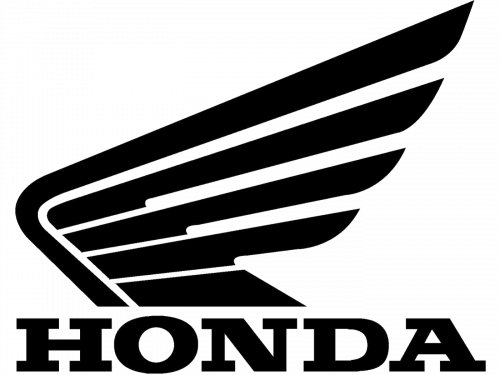 The wing in the Honda logo was associated with the company’s creator, Soichiro Honda. He was inspired by the motif of the Greek goddess of victory, Nika. The image of Nika first appeared on the Honda sign in 1948. It was the beginning of Soichiro’s activities in the motorcycle industry. 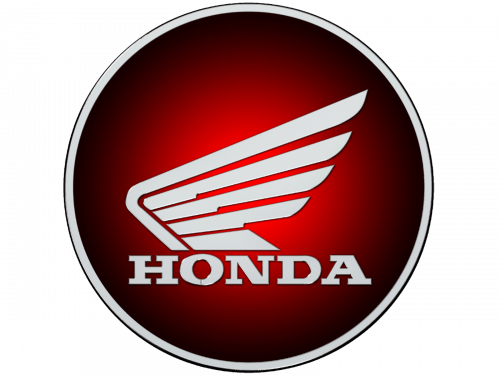 The Honda lettering from the company’s visual identity is set in all capitals of a strong and stable serif typeface with a confident and solid character. The letters in thick lines have massive square serifs and are executed in a font, which is pretty similar to Colt Black and Clarendon LT Std, but with some lines modified and serifs shortened.

The black and silver color palette of the modern Honda badge makes the brand look elegant and luxurious, evoking a sense of precision and attention to detail. This color combination also makes the iconic logo timeless and points to the professionalism of the brand.

Where is Honda made?
The main part of Honda automobiles and motorcycles is produced in Japan, though for the American market the vehicles are produced in the USA and Mexico.

1974 – the beginning of production of the legendary Honda Gold Wing model – GL1000. It was first presented to the public at the motor show in Cologne, and just one year later it begins to be actively marketed in the USA. The motorcycle has the first liquid-cooled four-stroke motor. Besides, a shaft is used as the main gear on it. Another innovation was the fuel pump – its installation was required because the Gold Wing had two fuel tanks – one between the handlebars and the seat and the second hidden under the seat for optimum weight alignment of the motorcycle.