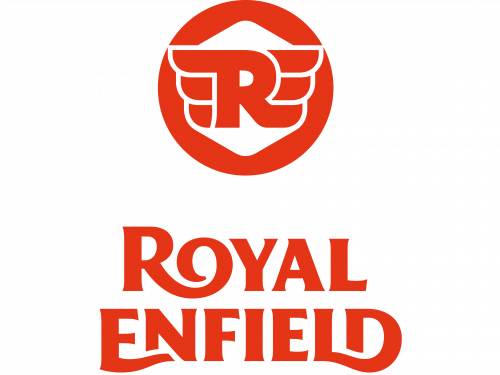 Royal Enfield is the iconic brand of motorcycle ax which was established in the middle of the 19th century in Birmingham, United Kingdom, and turned into the brand we all know today in 1955. It is considered to be one of the most recognizable brands of bikes ever existed in the world’s market of two-wheeled vehicles.

The famous brand started to make its first steps in the period from 1851 — 1890 in England, in a small village called Hunt End. It was a quiet and slow start of the activity, but already in the peridot from 1897 to 1909 the company had all sorts of projects, ranging from four-wheeled quad bikes and cars to a motorcycle with a motor. Its very first motorcycle Royal Enfield released in 1901.

In 1909, the motorcycle show presented the Royal Enfield with a V-shaped engine producing 2.25 hp, two years later the motor power was increased to 2.75 hp. The model was in production until 1914.

During World War I production was completely reoriented to the needs of the British and allied armies, at that time the most popular model was a motorcycle with a sidecar, with a machine gun mounted on it. Royal Enfield was in huge demand. And since that time it kept growing and developing.

In 1947 Bullet 359 saw the light. Its performance was very efficient for its time, this motorcycle installed a four-stroke engine, vertical cylinder arrangement, pendulum mounting of the rear wheel, and telescopic fork. Later, the engine design underwent various changes, but somehow it was taken off the assembly line only ten years later.

In 1949, a whole new era for the Royal Enfield brand began. Motorcycle Bullet 350 began to be produced in Madras. At first, all the parts were supplied from England, and the Indian factories had only to assemble the motorcycle. Over time, the Indians fully mastered the production cycle, and the need to supply components from overseas completely disappeared.

In 1960, it was decided to expand the Royal Enfield presence, and the brand entered the US market. In North America, it came under the name Indian. A year later, motorcycles actively participated in the racing series in the U.S. and won more than 30 championships, it was a huge success, which continued until 1964.

By 1970 the brand’s factory in Madras had gained full independence. Within a short period, the motorcycles were slightly visually updated, but the overall design remained the same.

In 1980 Royal Enfield updates its iconic Bullet, and in 1990 the world’s first serial diesel motorcycle is put into production.

In 1993 a 60% controlling stake in Enfield India is acquired by Eicher and the company is Bering renamed Royal Enfield Motors Limited.

In 2002 the company introduced the Bullet Machismo 350 and the Thunderbird 350 compact cruiser to the public. The last was subsequently recognized as the best cruiser of 2002.

From 2005 to 2011 Royal Enfield has undergone tremendous changes. The company began to move towards the European construction of the motorcycle, the gearbox settled from the right side to the left. In 2006 an Austrian engineering company developed a new engine for Royal Enfield, it was equipped with Japanese injection and starter. 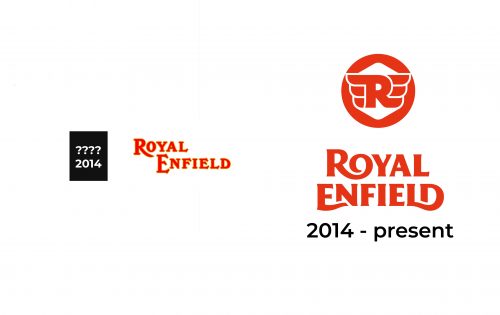 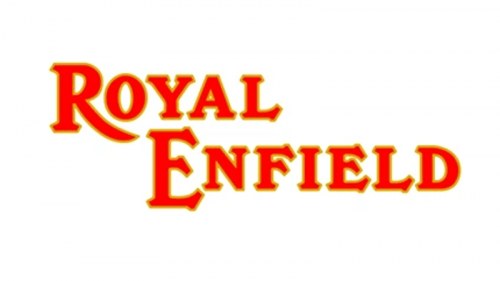 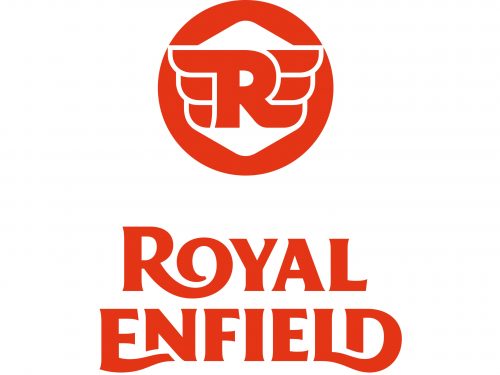 The current Royal Enfield visual identity is still based on the lettering from the original version of the brand’s logo, where it was set on the horizontal banner placed on the bottom part of a circular yellow and gray badge with a cannon in the center.

After the redesign, the logo got simplified to enlarged lettering in all capitals, with the first letters of two wordmarks enlarged and their tails elongated and curved. The circular red and yellow emblem is placed above the inscription. 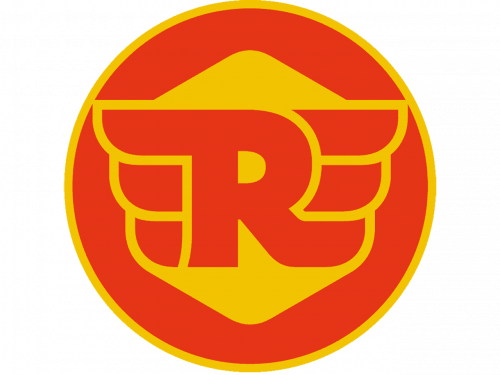 The emblem of Royal Enfield is a stylized red letter “R” with two wings. The letter, outlined in yellow, is placed on a yellow hexagon inside a solid red circle. It looks playful and fun, but at the same time evokes a sense of power and determination, while two smooth wings represent speed and freedom. 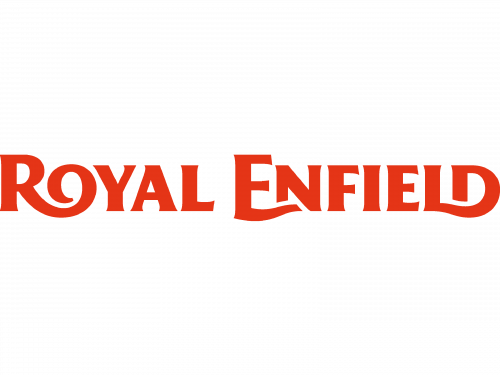 The custom Royal Enfield inscription in the uppercase is executed in a classy and stable sans-serif typeface with the lines of some letters elongated and softened. The font, which is close to the one on the brand’s visual identity is probably Medin Medin or Ribelano Black.

After the major redesign of the logo, red became the main color of the brand, representing its passion for the motorcycle industry, power, and progressiveness. The yellow details, which are still present on some of the versions, add energy and dynamics, making the logo even brighter.

Throughout the history of the motorcycle industry, some truly outstanding examples of Royal Enfield bikes with a side trailer have seen the light. The first to mention is the 180 Model, which has a volumetric JAP type V-Twin engine. In the postwar period, the most popular were models G and J, endowed with well-executed running gear.

In 1980 Royal Enfield released the Mini Bullet, a lightweight, 200 CC two-stroke motorcycle with a sporty design. 1983 saw the introduction of two small-cube models at once, the Silver Plus 50 CC scooter and the Explorer motorcycle with two-stroke 50 CC Zundapp 6.5hp engine. Huge sales of the moped were provided by women who could ride it in a sari. Cast aluminum rims were used for the first time in India.

Another legend of the brand was the Fury 175, a 175cc Zundapp two-stroke motorcycle and a five-speed gearbox. It was the first motorcycle in India to have a hydraulic disc front brake. By Indian standards, this motorcycle was 10 years ahead of its time.