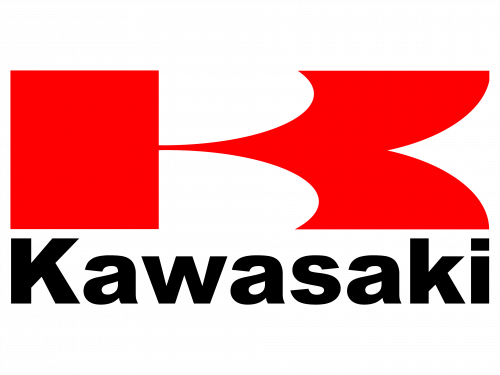 Kawasaki is the name of one of the world’s largest motorcycle companies, whose goal is to produce technically advanced products that are a pleasure to use and guarantee high quality. The company was founded at the very beginning of the19th century and was founded by Shozo Kawasaki, whose last name the company still bears to this day.

Kawasaki was established in Tokyo in 1906. It got its name from the name of its founder, Shozo Kawasaki. At the very beginning of its history, the company specialized in ship repair and cargo transportation, gradually expanding its range of interests. At various times it has tried itself in railway and civil engineering, building rolling stock, aircraft, and components, and repairing and servicing vehicles. Today Kawasaki still has a strong position in the construction of environmental infrastructure, power plants, industrial facilities, and even spacecraft, but the global popularity came to the brand for its motorcycles.

Initially, Kawasaki facilities were focused on the production of gearboxes for the motorcycle industry. In 1949, the decision was made to design the brand’s engine. Since 1951, two-stroke and four-stroke power units made by Kawasaki were installed on bicycles of other brands. Production of spare parts for third-party manufacturers did not bring the desired revenue and capacity utilization. And in 1953, motorcycle production was spun off into a separate division of the company, which was named Meihazu. Its task was ambitious: to develop its motorcycle models from scratch.

In 1954, two hundred samples of Bikescooter VK-2 rolled off the assembly line. The Meihazu 60, a bicycle with an outboard engine, was also produced at the same time.

Mass production of motorcycles began in 1957. The first production model was the Meihazu B7, which was renamed Kawasaki B8 in 1961. The bike was equipped with a 125 CC single-cylinder two-stroke engine, four-speed gearbox, ridge frame, and pendulum rear suspension.

In 1966, the 650 KAWASAKI W1 was released by the brand. It was equipped with a four-stroke two-cylinder engine with 50 horsepower and a displacement of 650 CC and could reach speeds of up to 180 km/h.

Where are Kawasaki bikes made?
Kawasaki has several production facilities all over the globe. With the main plant in Japan, the company also produces its motorcycles in the USA, India, Thailand, and Bangladesh.

The next novelty of the company was created in 1968. It was called H1 or Math III. The motorcycle had a 500 CC two-stroke engine with three cylinders, the intake was operated by a piston, and the exhaust was made through three exhaust pipes, two of which were located on the right and one on the left. For the first time, an electronic ignition system was used in production motorcycles.

In 1972 Kawasaki introduced a real masterpiece – the Z1, which surpassed all analogs. The bike was equipped with a 903 CC engine with 82 hp, two camshafts in the cylinder head, an electric starter, four exhaust pipes, and a 5-speed gearbox. The new bike had a tubular frame and dual disc brakes on the front wheel. The top speed was 209 km/h, but some sources claim that the owners squeezed all 230 km/h.

In 1979 another iconic model was designed by Kawasaki — the Z1300, which did not leave the company’s assembly lines for 10 years. The engine of this bike had six cylinders, 1,286 CC volume, liquid cooling, and 120 hp.

In 1980, a new lightweight model, the AR50, designed for easy city driving, was presented to the public. The motorcycle was equipped with a two-stroke single-cylinder 49 CC power unit and a six-speed transmission.

In 1982, Kawasaki unveiled the world’s first mass-produced turbocharged motorcycle, the ZX750 Turbo with a 738 CC engine and 112 hp. The motorcycle was equipped with new pistons, a reinforced five-speed gearbox, a new oil pan, an electronic injection system, and aluminum fairing.

In the 1990s Kawasaki creates its first superbike, ZXR759 Stinger. The bike came with an inline four-cylinder engine with a displacement of 748 cm³ and an output of 107 hp. It was the bike Scott Russell who won the World Championship in 1993.

In 2000, the most famous Kawasaki bike saw the light. The brand’s sporting portfolio got a new star — the ZX-12R Ninja, which managed to be the world’s fastest production bike until 2006. It marked a new era in motorcycle design, being the first to feature an aluminum monocoque frame.

The outstanding speed characteristics were achieved thanks to the liquid-cooled, in-line four-cylinder engine with a capacity of 1,199 CC and an output of 178 hp. And thanks to electronic fuel injection and inertial boost, peak power reached as much as 190 ho. The speedometer reached 100 km/h in 2.7 seconds, and 200 km/h – in 7.2 seconds. Maximum speed – 308 km/h 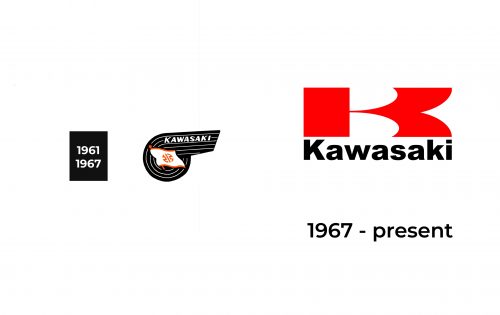 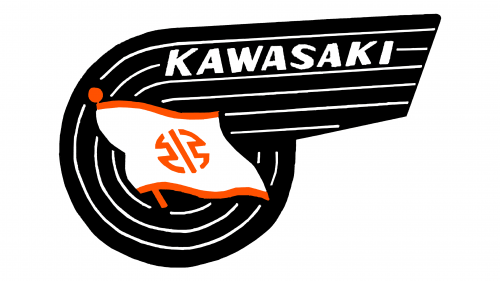 The very first logo of Kawasaki was completely different from what we all can see now. It was a black rounded shape with thin white stripes and a traditional Japanese flag in white and orange on it. The wordmark was set in white lettering on the upper right part of the emblem. 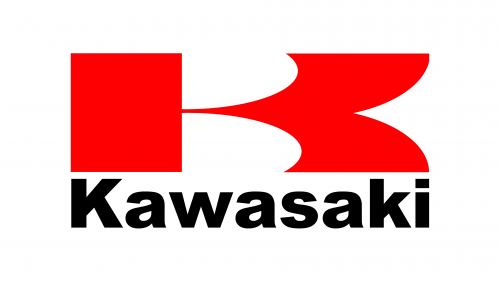 In 1967 the logo was redesigned and has never been changed since then. The modern Kawasaki logo is a bright red combination of a stylized bold letter “K” and the wordmark, which can be placed whether under the symbol or in its right. 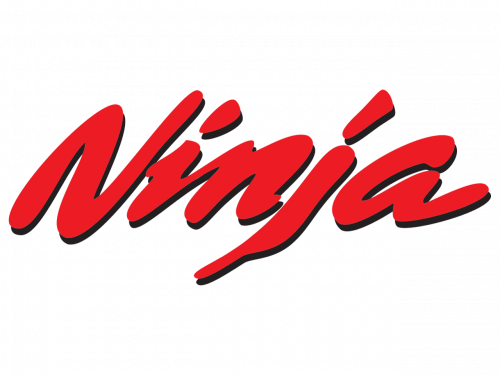 For its iconic Ninja motorcycle, Kawasaki uses a different logo, though it can be placed under the main emblem of the brand. The Ninja visual identity is based on a stylized handwritten inscription in bold smooth lines, though with a sharp character, which brilliantly reflects the name of the bike. There are several options of color palette available for the Ninja logotype — from bright green to black and red. 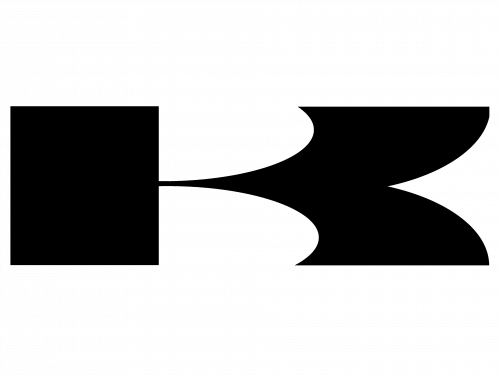 The symbol of the Kawasaki brand is a massive yet clean and neat letter “K”, executed in thick lines with distinct cuts and contours. The letters are horizontally extended and have the inner tails of their right bars slightly curved to the center. 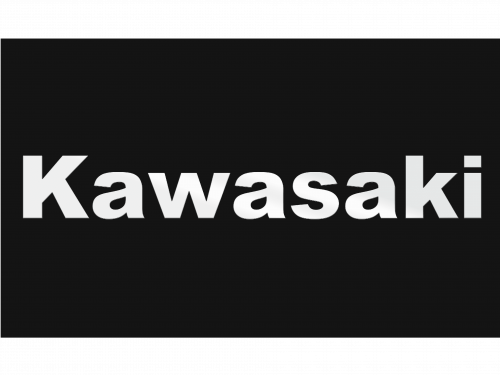 For its logotype, the Japanese brand uses a traditional sans-serif typeface, which is very similar to Arial Std Black or Newhouse DT Black. Both fonts are stable and solid and evoke a sense of fundamental approach and professionalism.

The official color palette of Kawasaki is based on a scarlet red shade of red, which is usually placed on a white background. This color is a symbol of passion and strength, and it also represents the speed and power of the brand’s motorcycles.

The most famous brainchild of the Japanese brand is the sportbike Kawasaki Ninja 300. Kawasaki Ninja 300, like any sportbike, has a hands-off riding position which is uncomfortable for long rides but comfortable for high-speed riding. This model is the most popular among beginners because of its reliability, controllability, relatively low price, and a landing close to the classic models. In other words, the driver is not as steeply leaned forward as on other sportbikes.