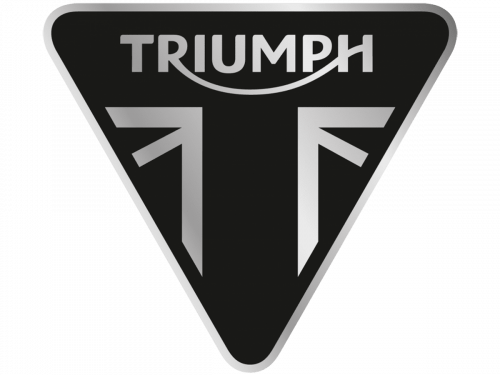 Triumph is the name of one of the iconic motorcycle brands, which was established in 1885 in the United Kingdom, and turned into a modern brand in 1983 after John Bloor acquired the rights. The brand produces motorcycles in a wide variety of classes, ranging from sports to retro motorcycles, which are the symbol of the label.

The history of Triumph motorcycles lasts for more than a century. The company of the same name was founded in 1885 in Great Britain by Siegfried Bettman, who headed it until 1936.

The first motorcycle was produced by the company 17 years after its establishment,  in 1902. It was a light model, based on a bicycle, where a Belgian engine of 239 CC and 2.25 horsepower was attached. Over the years, the Triumph bikes improved won races, and gained popularity.

Where are triumph motorcycles made?
The majority of all Triumph motorcycles are still made on the brand’s production facilities in the UK, though the company has five more plants in Thailand and Brazil, which allows them to cover distribution in Asian and Latin American markets.

In 1905 company recruited Charles Hatheway, a very talented engineer, who helped design a single-cylinder engine with a capacity of 3 hp and 363 CC. A motorcycle with this engine could reach 72 km/hour, which was a breakthrough. The company’s designers slowly but surely developed its mechanisms, thinking over every detail. This allowed Triumph to establish itself on the market as a manufacturer of reliable and dynamic motorcycles.

In 1907 Triumph motorcycles start taking leading positions in races, which increases their popularity and allows expansion to the international market. Only during World War I, the company produced more than 30 thousand motorcycles for the army. The most popular models then were the 4-horsepower Model H, also called the Trusty Triumph. They were equipped with a primary chain drive, a 550 CC motor, and a three-speed transmission.

After the war, an improved version of the Model H called Model 50 came out, in which the belt drive was replaced by a full chain drive complemented by a spring drive.

In 1923, the company sold the bicycle production and started producing cars in addition to motorcycles. Business was so good that in 1927 the brand produced a thousand motorcycles a week. The flagship was the Triumph TT with a 500 CC power unit, which had been designed with the Brooklands racer.

In 1936, production was taken over by Edward Turner, and in 1973 the company Norton-Villiers-Triumph was formed, producing motorcycles until 1990. In 1990, with the arrival of new owner John Bloor, the modern history of Triumph began, which three new models in the Triumph portfolio.

Who owns Triumph?
Since the early 1990s, the iconic British motorcycle manufacturer is owned by Bloor Holdings Limited, with John Bloor as its head.

At that time, the company produced very few motorcycles – no more than eight per week, but already in 1996 production had grown to 15 thousand bikes. Triumph launches the new line — enduro class motorcycles Tiger 900, Sprint, retro-model Thunderbird, and Adventurer.

Gradually there was a re-equipment of the produced models, competition with well-known motorcycle companies, Honda and Ducati, forced the Triumph designers to develop new motorcycles with technical characteristics ahead of their time.

As a result, the stunning T595 Daytona was launched in 1997, which allowed the Triumph brand to once again become an elite motorcycle manufacturer. 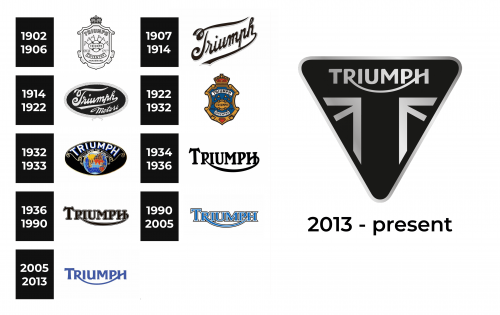 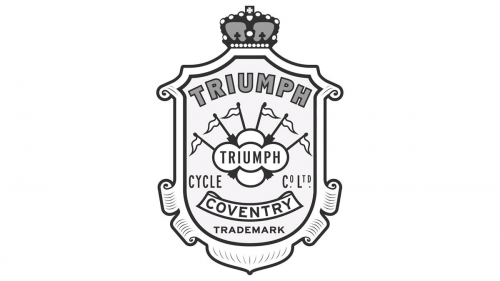 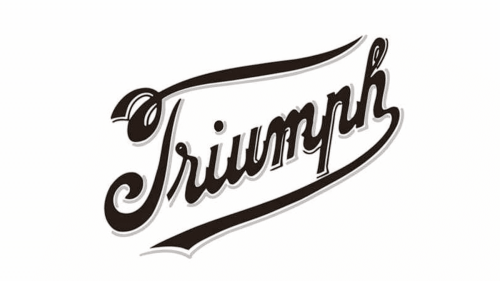 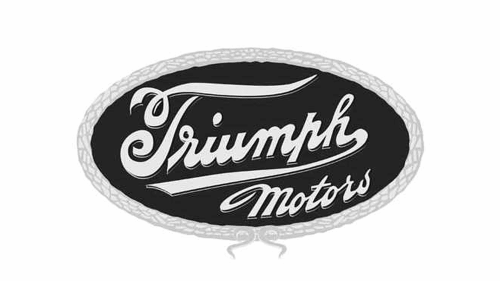 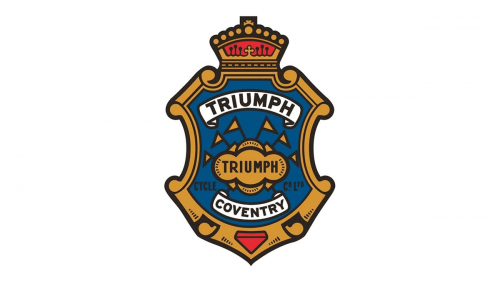 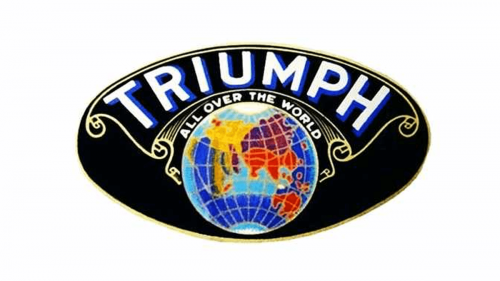 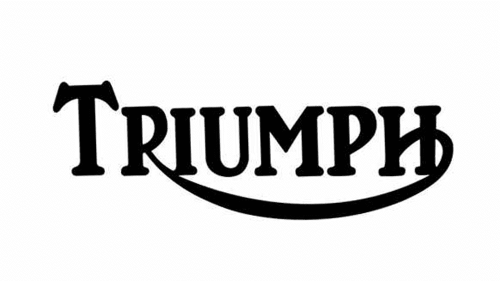 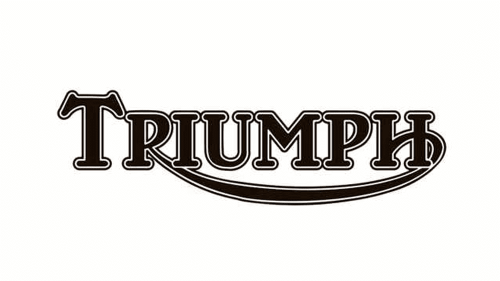 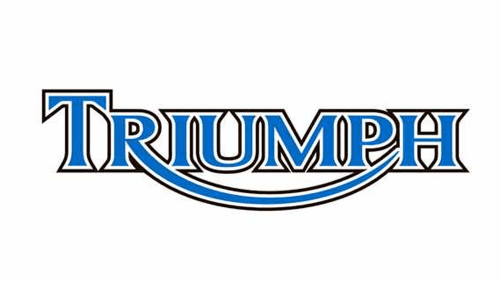 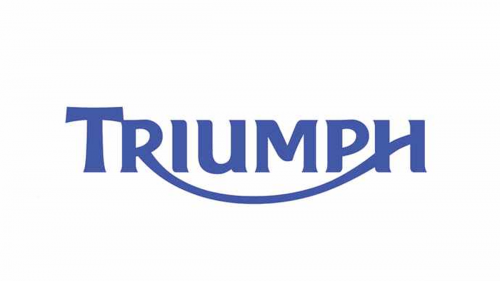 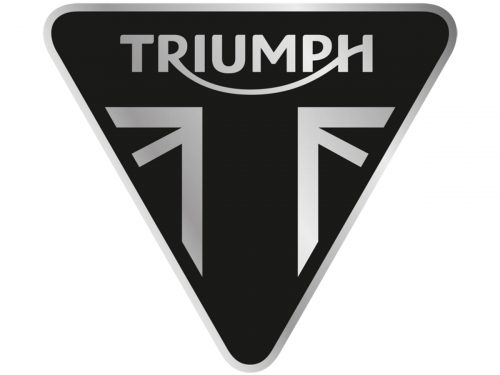 The Triumph visual identity is elegant and sleek. Based on the logotype, created during the company’s early years, it still looks actual and sharp, representing the true style and timelessness of the iconic brand.

The Lee are two possible versions of the Triumph logo — a simple monochrome wordmark, which is used without any additional elements, or a triangular crest with the Union Jack patterns and the inscription placed along its top side. 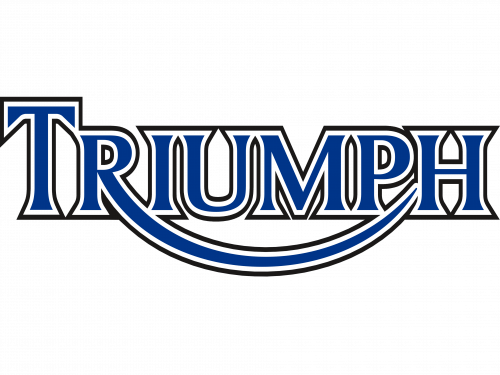 The Triumph emblem featured a shape of a triangle pointing down, with its corners rounded, and a partial Union Jack motive in the middle. The lettering is placed above the flag fragment and executed in white, contrasting with the dark gray and black background of the crest. The emblem of the brand yells pride and value of its legacy, enough it looks modern and cool, it evokes a sense of traditional approach and fundamentalism. 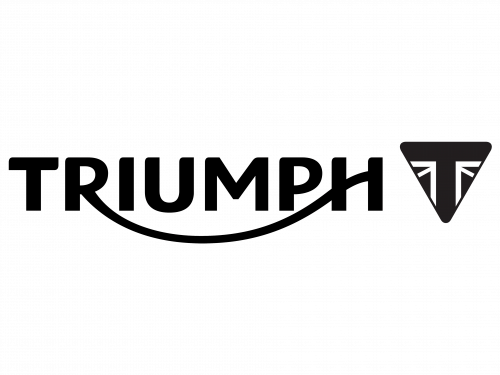 The iconic Triumph logotype is executed in a custom typeface with the clean contours of the letters, smooth lines, and a tail of the “R” elongated, creating a “smile” under the wordmark. The closes font to the one from the Triumph logo is probably Arpona Bold or NS Mudolf Sans Serif, but with some elements modified.

As for the color palette, the British brand prefers using monochrome, a combination representing style, elegance, and power.

The flagship of the company, the Triumph Rocket III mega cruiser, is at the head of the range. This motorcycle is equipped with an obscenely large engine with a volume of 2294 CC, installed longitudinally and developing up to 140 hp.

The torque of this bike is 200 Nm, which is more than many modern cars. Acceleration to 100 km/h is less than three seconds. The dry weight of the motorcycle is 320 kilograms and its length is 2,5 meters.