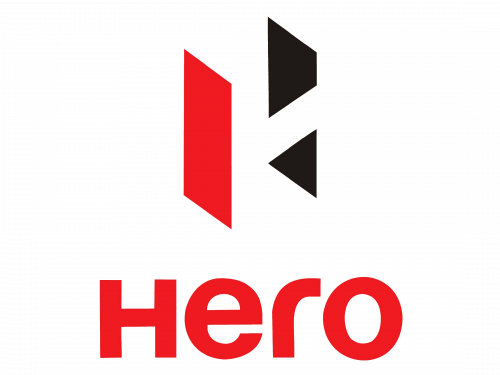 Hero is an Indian motorcycle manufacturing brand, which was established by Honda in 1984. The company, created as Hero Honda, changed its name in 2012. The thing, that made Hero popular is the affordable prices and the decent quality of its motorcycles, which earned a strong and good reputation all over the globe.

Hero Motocorp company occupies a leading position in the Indian motorcycle market, selling about half of all bikes in India. This is truly remarkable and makes the brand one of the largest manufacturers and retailers in the world’s motorcycle segment. At the moment Hero product line includes 21 models of motorcycles and 4 models of scooters. All the vehicles have motors of no more than 225 CC.

Till the beginning of 2011, Hero was a joint venture with Japanese Honda, effectively acting as a brand ambassador in India under the name HeroHonda. It was still a pretty independent brand, with its line of bikes, production facilities, and everything else. But during 2010, as Honda aimed to take full control of its operations in India, the JV split and Hero remained in existence as an independent brand.

Founded in 1983, the company began producing motorcycles in 1985. Starting small (was more a workshop), the company was able to produce its 100 thousandth motorcycle by 1987. By 1991, on its account have already been half a million bikes manufactured. The mark of one million units of motorcycles Hero brand passed in 1994.

The growth of the company was very fast, it took only ten years to release its 2 millionth motorcycle, and only two more years to double it (the 4 mil mark was reached already in 2000). A year later, in 2001, Hero became the largest motorcycle manufacturer in the world in terms of production volume. Now the company produces more than five million bikes annually, and total production since its founding in 2015 has exceeded the 60 million mark. 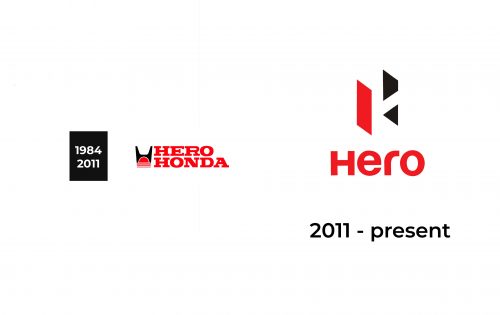 The visual identity history of the Hero brand is not very intense: the logo was redesigned just once, in 2011, when the name of the company changed from Hero Honda to Hero Motocorp. Though the color palette remained untouched. 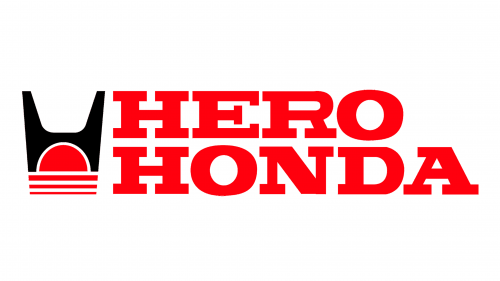 The very first logo designed for Honda Hero was based on the official Honda emblem, its recognizable letter “H”, which was drawn in black and has a red half-circle under it, resembling a rising sun, the symbol of Japan, and three horizontal lines of different thicknesses, underlining it. The logotype was written in bold red letters and set in two levels, with “Hero” in capitals placed above “Honda”. 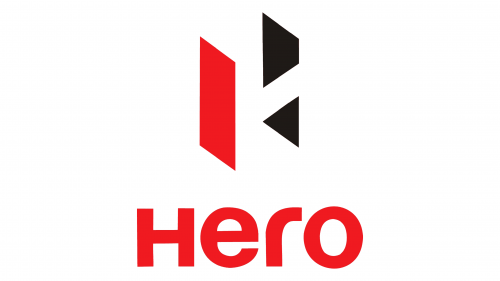 After the brand changed its name to Hero Motocorp, the logo was redesigned in 2011. The new emblem is a stylized geometric badge in red and black, with some white elements, and the logotype is still set in red but has only “Hero” inscription with all letters in one size, but with the “H” in the uppercase. 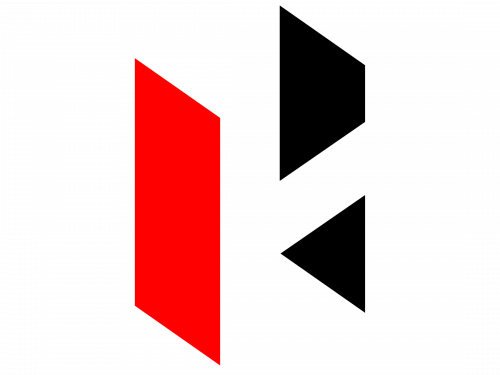 The Hero emblem is a stylized letter “H”, composed of three geometric figures — a red vertically oriented parallelogram on the left, and a black trapezoid above a black triangle on the right. The clean lines and sharp angles of all three elements make the whole image look modern and professional, evoking a sense of progress and innovative approach of the company. 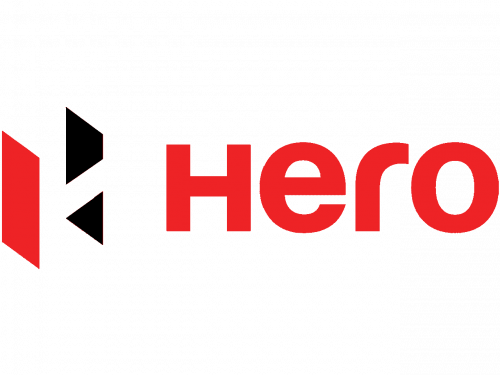 The Hero logotype is executed in a custom typeface with thick lines and clean cuts of the letters, set in a sans-serif font. The closes type to the one from the Japanese manufacturer’s visual identity is, probably Heading Pro Ultra Wide Extra Bold, with the letter “R” softened and modified.

The combination of red, black, and white on the Hero badge, reflects the power company and its fundamental approach, along with passion and progressiveness. Red is a color a strength, while black stands for confidence and stability, and the white elements add such qualities as responsibility and loyalty to the company’s profile.

Hero sets new records almost every year, being the best selling motorcycle brand in the world. The last hit of the company is Hero Splendor and its innovative iSmart version. The Hero Splendor iSmart is equipped with the i3S system, the principle of which is to shut down the engine after a short period of idling, e.g. when stopping at a traffic light or standing in traffic. The engine starts automatically when the clutch lever is pulled. Similar technology is used in hybrid cars, but for the first time on motorcycles.