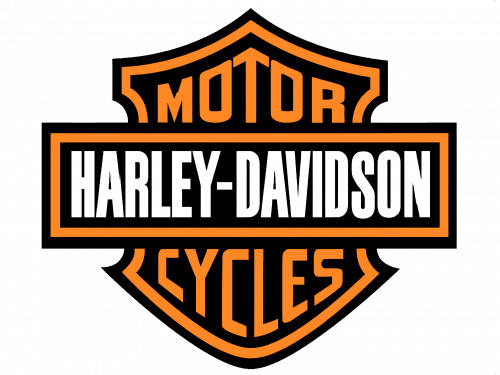 Harley Davidson the name of the world’s most famous motorcycle brand, which was established in 1903 in the United States. The American bike manufacturer is based in Milwaukee, Wisconsin. The company manufactures and sells heavy motorcycles designed for highway riding.

When did Harley Davidson start?
Harley-Davidson was established in 1904 when three friends started their workshop, which in three years turned into a successful business.

The legendary brand began its history at the beginning of the 20th century, when two friends, William Harley and Arthur Davidson, decided to create an engine for their boat. The result of their labors was a 167 CC motor. Later, the friends installed it on a bicycle, but there was a distinct lack of power. Then they started working on a new engine to install on a significantly revised frame. It was a 405 CC engine, which was decided to put on production.

In 1907, the company released a new motorcycle, with an engine capacity of 4 horsepower and 440 CC. At the same time, William Harley was developing a new motor with a V-shaped layout. According to plans, this 800 CC engine, was to develop a maximum of 7 horsepower. The motorcycle was announced by the company in 1909 and instantly became popular. That was a Harley-Davidson 5D.

Who is Harley Davidson?
Harley Davidson is not the person, but a brand, which got its name from the surnames of its founders, William Harley and Davidson brothers, three friends, who created a truly iconic label.

From 1909 to 1920, the brand’s motorcycles were actively developed. By the end of the 1920s, the company reached the first positions in production and sales. Each year Harley Davidson produced 28 thousand bikes, which were sold at more than 2 thousand locations in 67 different countries.

Already by the end of 1929, the company was able to create the engine with a capacity of 593 CC and 10.5 horsepower, which was truly impressive.

The crisis years were hard for Harley Davidson, as for many others. The model that could save the company was a motorcycle E, released in 1936. The design included a 998 CC engine, with 37 and 40 horses in the forced version.

During the Second World War, the company created a military version of its WL bike. Besides, in 1942 was released a motorcycle of a similar German design “XA 750”.

The first model released by the company after the war was Model K, introduced in 1951. It was equipped with a 30 hp motor, four-speed gearbox, and the same engine as its predecessor.

Where are Harley Davidson motorcycles and parts made?
The Harley-Davidson motorcycles are assembled in one of four American plants — in Wisconsin, Pennsylvania, and Missouri. As for the parts, they are mainly imported from Europe and Asia. The brakes and clutch for the legendary choppers are produced in Italy, while the engine pistons come from Austria, and suspension — from Japan. Some of the electronic parts are imported from China or Mexico.

One of the most popular models of the brand was XL Sportster, which was also released in the 1950s. The engine volume on this model was 883 CC with 40 horsepower. There was a sport version of the model called XLH, the most powerful, and extremely lightweight XLCH. The last one could reach 180 km/h.

In1964 Harley Davidson installs a new engine in their bikes, which allows to development of 58 horsepower.

At the moment, Harley-Davidson is a prosperous company producing more than 200 thousand motorcycles a year. They are exported to countries around the world and enjoy well-deserved authority there. Besides, the company owns practically half of the whole U.S. market of heavy motorcycles. 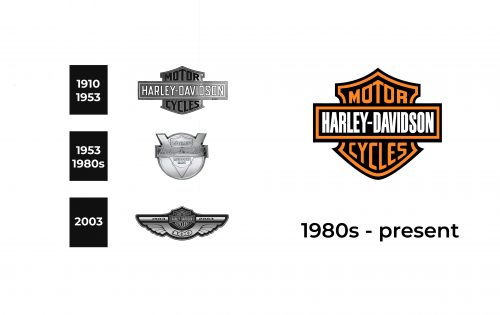 The Harley-Davidson visual identity design is instantly recognizable all over the globe, being iconic not only for the bikers. It can be seen on fashion and souvenir items and can present in homes of people who are not even related to the motorcycle culture, just because it is a legendary brand, which deserves respect.

Who owns Harley–Davidson?
Harley-Davidson is a public company, which has never had a sole owner. Founded by William Harley and Arthur and Walter Davidson, the company was incorporated in 1907, and since then owned by its stockholders. 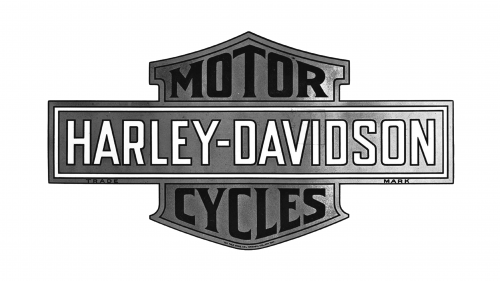 The very first logo for Harley-Davidson was created in 1910 and hasn’t changed much since then. A geometric crest with triangular too and bottom parts has a horizontal rectangular banner crossing it in the middle point. The large crest boasted a black “Motorcycles” inscription, while “Harley-Davidson” was written in white, on a rectangular banner. 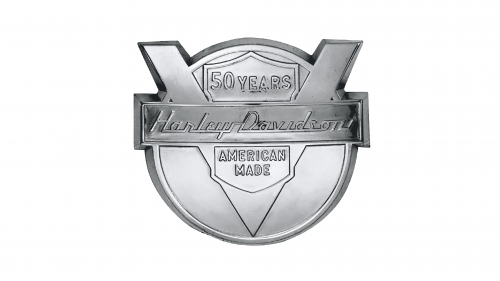 The script font replaced the clean sans-serif in 1953, and the angular shape of the logo turned a circle. The “American Made” lettering was added to the badge, along with the “50 years” mark, set above the main wordmark. 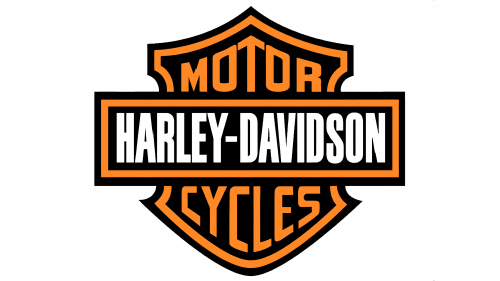 The redesign of the 1980s brought the initial badge back but colored it in black, orange, and white. Now all the elements were sent in black and orange, except for the “Harley-Davidson”, which is written in black. 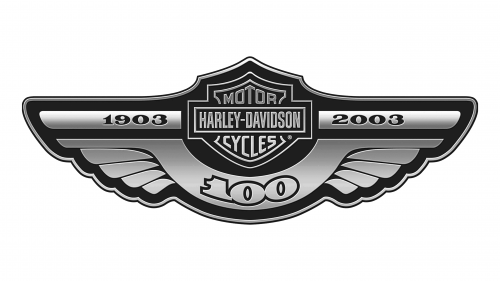 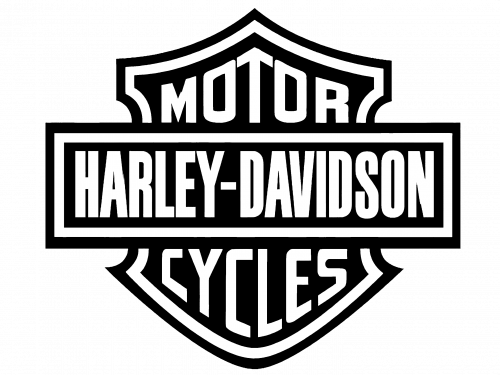 The Harley-Davidson emblem is geometrically clean and simple, but its color palette and thickness of the lines make it look bright and powerful. The emblem of the brand looks solid and confident in any possible background, whether it’s black polished metal or the iconic chopper, or a white t-shirt. 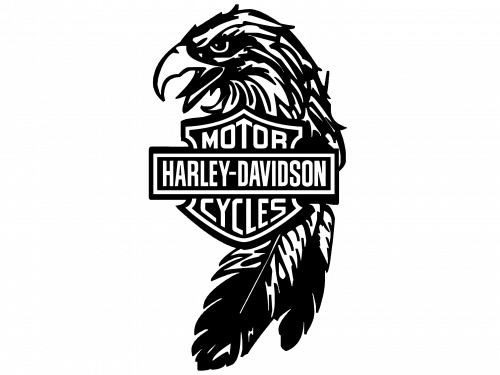 Harley-Davidson uses a traditional bold sans-serif typeface for its visual identity and its simplicity and solidness brilliantly represent the values and essence of the brand. The type of the company is Block Gothic RR Bold ExtraCond very close to such fonts as Zuume Bold and Industrial Gothic Pro Double Line.

What font is the Harley–Davidson logo?
Harley Davidson logo is executed in a strong and stable sans-serif typeface with thick lines and traditional shapes of the letters. The official font of the legendary brand is Block Gothic RR Bold ExtraCond.

The black, orange and white color palette of the iconic logo is a representation of the passion, energy, and progressiveness of the brand, along with its professionalism and confidence in the industry.

One of the most iconic Harley-Davidson models is the Fat Boy. This bike, according to one of the versions, got its name after the Fat Man and Little Boy bombs dropped on Hiroshima and Nagasaki. Originally created in 1976, In 2018, the bike got a new look, but it hasn’t lost its recognizability and character.

Fat Boy pleasantly surprises with his dimensions. Its height in the saddle is almost 70 cm. Even though the sitting position is a bit unusual, it is quite comfortable. Comfortable seat, short handlebar, and far removed wide footrests – platforms allow you to easily fit on the bike, even with a large heavy backpack.