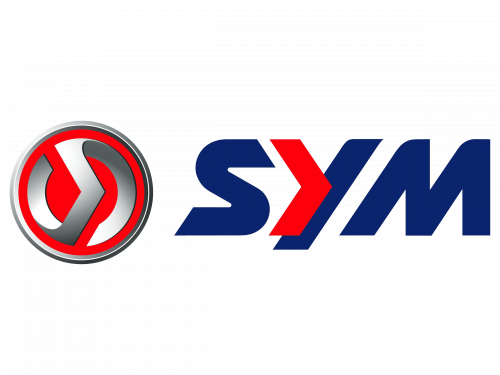 SYM is the shortened name of the famous Taiwanese company, which was established in 1954 under the name Sanyang Electric Machinery Plant. That’s when it founded the first factory producing electric generators for bicycles. And today SYM is a globally famous manufacturer of affordable and high-quality scooters and motorcycles.

The Taiwanese company SYM began its history in 1954 as a manufacturer of bicycles, and already eight years later, thanks to Japanese investors, the company reorganized and began to produce mopeds with a small engine capacity. The good quality and pricing politics quickly put the brand at the top of the list, and as a result, based on its production was established, SYM became a partner of the famous Korean brand Hyundai.

In 1962, in cooperation with the Japanese company Honda, production of 50- and 80cc scooters was launched at the SYM plant, followed by the production of small cars, which later became the basis for some Hyundai cars. Since 1978, SYM has had a special department, which was engaged in optimization of production, design of the equipment, improvement of design, which is carried out according to the wishes of consumers. The company annually spends about five percent of the total annual income on the development of new designs.

SYM had updated its production capacity at the end of the 1970s, involving in its new developments more than two hundred experts from different countries. This has served as an impetus to optimize production and introduce the latest developments and technologies on the conveyor of motor vehicles. The main accent was made on the improvement of product quality, new design solutions, and renewal of engine construction. With the help of Japanese investment, the company has completely renewed its motorcycle equipment lineup and gained large markets for its products. The quality of Taiwanese scooters is appreciated in many countries around the world.

Now the company occupies first place in the domestic market in Taiwan and has several plants producing scooters and motorcycles, which remain very popular in the international market. In 1994, SYM rolled off the assembly line about 5 million scooters. The company is constantly updating its international certification standards for the production of motorcycles, applying newer technological solutions to improve the quality of products. More than 40 models of SYM motorcycles, ATVs, and scooters have been awarded more than once at international exhibitions. 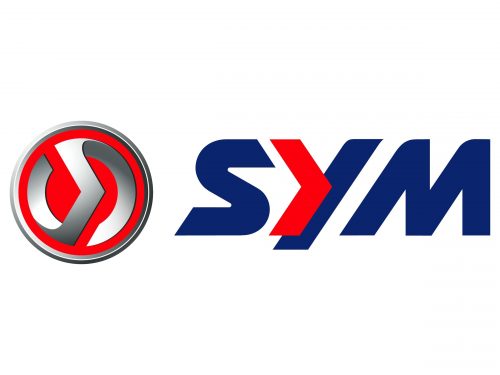 The visual identity of the Taiwanese motorcycle manufacturer is smooth yet confident and memorable, dies to the use of bright colors and sleek bold lines. Its logo is based on lettering, which is usually executed in a two-color scheme but can also be seen in monochrome or silver variants.

The official version of the SYM logo is composed of a custom wordmark, which can be accompanied by a circular emblem on the left, and an “Engine of Life” tagline. 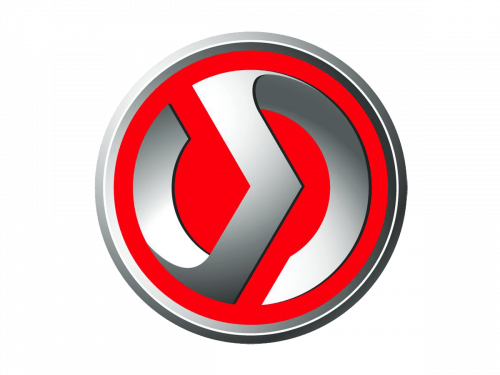 The emblem of SYM boasts a bright red circular badge in a thick silver frame with a silver symbol in the middle. It is an abstract modification of the previous badge, where the “SYM” logotype in silver lines was placed on a red background.

The current emblem looks modern and sharp, representing the young audience of the brand and its progressive and innovative approach to design and production. 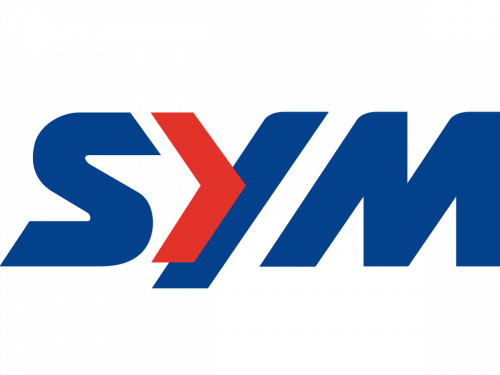 The capitalized and italicized SYM logotype is executed in a custom sans-serif typeface with smooth lines, softened angles, and sharp diagonal cuts of the letter-ends. The closes font to the one used by the Taiwanese brand is probably Ethnocentric Bold Italic, but with lines and contours modified.

For its official color palette, the brand chooses a combination of blue and Ted, complemented by a red and silver emblem. These three colors stand for power, confidence, and reliability, showing SYM bikes as safe, powerful, and stylish ones.

SYM is mostly known for its scooters with engine displacement from 50 to 400 CC. They meet the needs of consumers in a variety of price brackets, consume little gasoline. Most models of SYM scooters have a four-stroke engine. The design of SYM scooters is always very effective and ergonomic – all details of the body provides not only an aesthetic component of the design but also increases the fairness of the body.

Two SYM scooters, which deserve special attention are the GTS 300i and the GTS 250. They do not differ cardinally from each other, each contains an optimal level of comfort. GTS 300i uses more advanced engineering solutions. Signs of it are noticeable at first sight: non-standard design and full computerization. A special adornment is the system of optics. There are two eye-catching headlights in front, the form of which reminds wings to some people and even bat ears to others. This leads to the idea of stylized as the vehicle of the famous comic book hero – Batman. Such elements as additional LED lighting, zigzag fog lights, and clearance lamps only confirm this.