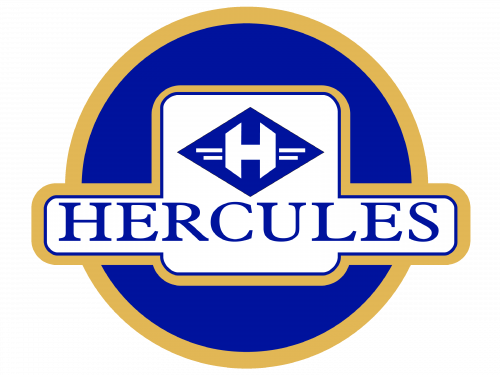 Hercules is the name of a historical motorcycle factory, established at the end of the 19th century in Germany. At the beginning of its existence, Hercules was known for the creation of bicycles, but changed its direction in two decades, releasing its first bike in 1904.

Hercules was created by Carl Marschultz in 1886 with the idea of production bicycles and began developing bikes 18 years later, in 1904. Later, Hercules consolidated with Zweirad Union and in 1963 it was acquired by ZF Sachs.

In the period of 1950s — 1960s, Sachs was the largest European producer of two-stroke motorbike engines. And Hercules used many of its motors in its line of bikes and scooters.

In 1974 Hercules introduced a Wankel-engined vehicle, being the first on the market. Its precursor was shown to the public in 1970, and the production started only three years later. This legendary model was sold in the UK under the DKW brand. 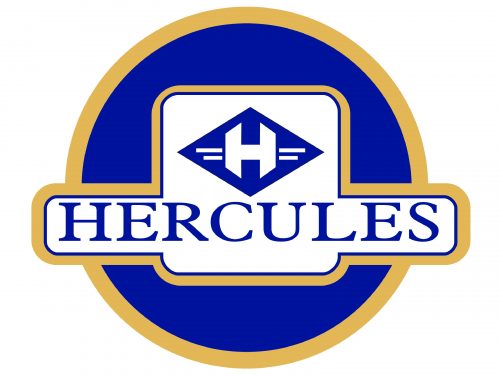 The logo of the historical motorcycle manufacturer was bright and memorable due to the use of the right color palette and traditional elements. The blue, white, and gold with classic serif letters and bold lines made it look like the art-deco poster, though when placed on the Hercules bikes it evokes a sense of professionalism and class.

The Hercules logo was composed of a solid blue circle in a thick golden outline and a square white badge in the center. The square has its angles rounded and was also outlined in gold, having a horizontally stretched banner, coming through its bottom part. The blue “Hercules” lettering was placed on that horizontal part, under the blue rhombus with the stylized white letter “H” on it. 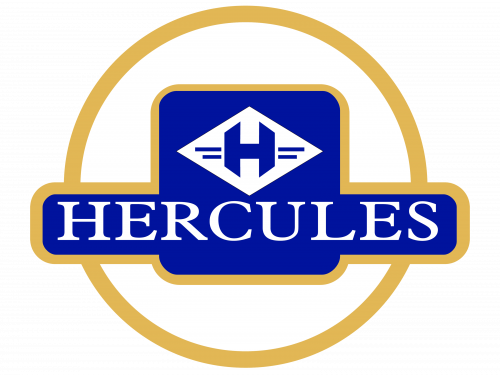 The Hercules symbol was a bright blue rhombus with the white letter “H on it. The letter had its edges cut diagonally, repeating the contours of the rhombus, and was placed between two pairs of horizontal white lines, resembling two wings, as a symbol of speed. 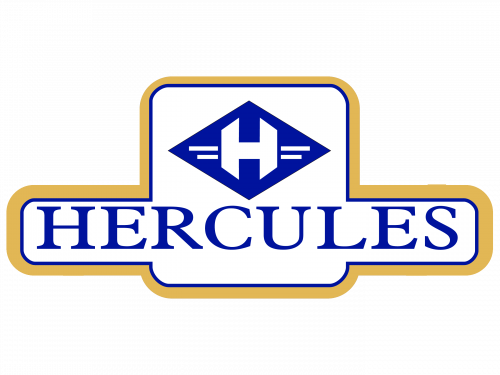 The capitalized “Hercules” inscription was executed in an elegant serif typeface, which was very similar to such fonts as Plantin Std Roman and Aldine 721. With traditional sophisticated contours and sleek lines with sharp serifs.

The blue, white, and gold color palette of the Hercules visual identity elevated the elegant badge, giving it a noble Royal look. Blue is a color of honor and reliability, while white stands for transparency and honesty, and gold covers it all with luxury and chic.

The most famous line of the Hercules motorcycles is Ultra. Serial production of the Hercules Ultra 80 began in 1981. The motorcycle was presented in three versions. It started with the simplest and cheapest one, Ultra 80 AC, which was equipped with a single-cylinder, two-stroke engine Sachs 80 SA, the working volume of 80 CC, 8 hp, five-speed gearbox.

Another bike was Ultra 80 Chopper. It is the same motorcycle but adapted to American aesthetics. High handlebars, characteristic saddle, and so on. There were two engines to choose from, air-cooled, with the Ultra RS 80 AC, or liquid-cooled, as on the more expensive versions.

And the most powerful of the Ultra Family, RS 80. The motorcycle was powered by a liquid-cooled Sachs 80 SW engine. It had an 80 CC displacement and 8.5 hp. The gearbox is five-speed, and as an option, six-speed.