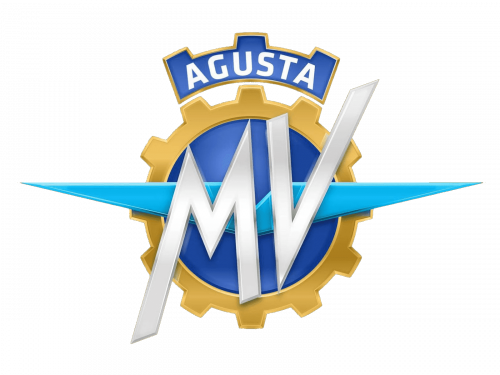 MV Agusta is a famous Italian brand of motorcycles, which was established in 1945. The brand is known for its affordable and stylish models of bikes, and numerous victories in various championships. Today the company, founded by Giovanni Agusta, also owns another famous motorcycle brand — Cagiva.

MV Agusta is a brand that is very well known all over the globe and doesn’t need any additional advertising. The brand earns a good reputation due to the constant yearly release of new models, which can satisfy even the most exacting demands.

For the first time, the name of the brand MV Agusta appeared at the very beginning of the 20th century: that was when Giovanni Agusta founded the company for the production of products for aviation. The brand began to produce motorcycles much later, but they almost immediately gained popularity among motorcycle enthusiasts.

In 1945 the Agusta brothers prepared their first commercial motorcycle prototype, which they were going to call Vespa 98 (“wasp” in Italian). However, it turned out that this name for their new scooter had already been registered by Piaggio, and is used until today, by the iconic scooter manufacturer. So the MV Agusta motorcycle was named simply by the number 98, meaning the engine volume in cubic centimeters.

In 1948, the company created the 125 CC two-stroke engine to allow rider Franco Bertoni to compete in the Italian Grand Prix. Bertoni wins the Monza race the same year and thus makes the name of the new motorcycle manufacturer famous. Since that time all eyes were on MV Agusta.

At the moment MV Agusta motorcycles are produced in a wide range of modifications. They are distinguished by different design and excellent technical equipment.

MV Agusta superbikes are designed for those, who enjoy speed, comfort, and freedom of movement. The most popular is the Brutale series, which maximum engine power is 102 kW. This modification is equipped with two types of power units, whose volume varies from 990 to 1090 CC and torque reaches 106 Nm. The most iconic model of the series is Brutale 910.

The MV Agusta motorcycles of the F4 series are also well-known among bike fans. They are created for the most demanding customers, who appreciate the sporty character of the models of this line and enjoy every moment on them. 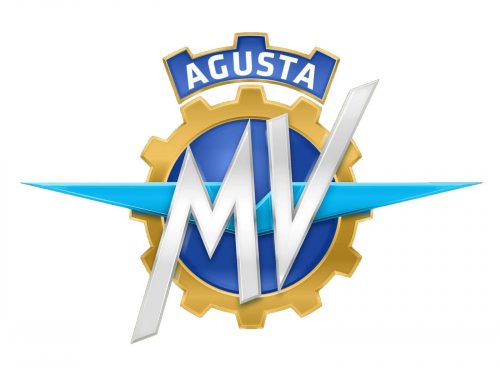 The visual identity of the Italian motorcycle manufacturer is sharp and delightful, executed in the best traditions of memorable design. Its recognizable badge has never been changed, just refined and strengthened throughout the years of the company’s history.

The circular MV Agusta logo has a shape of a gear, and a stylized crown above it, triangular light blue wings, and the strong and solid wordmark written on it. The logo looks modern and confident, without any hint of when it was created. 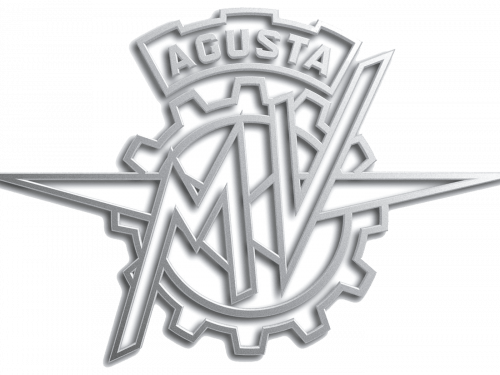 The MV Agusta emblem is composed of a gold gear with a blue circle inside and a stylized white “MV” monogram placed over it. The lines of both letters are straight and elongated, evoking a sense of power and determination.

The crown above the badge features a square shape and arched bottom line, adding to the confidence and strength of the overall image. 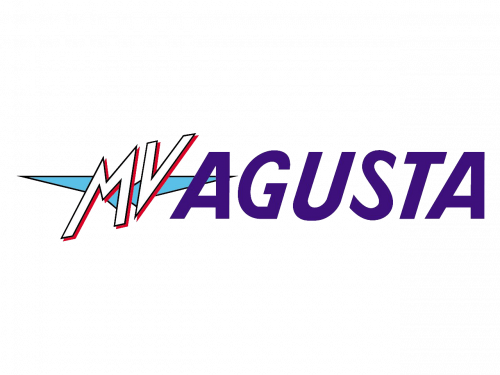 All the lettering on the MV Agusta badge is custom and was designed at the very beginning of the company’s history. Straight and clean lines of the sans-serif font add professionalism and stability to the sharp logo lines.

The color palette of the brand is based in two shades of blue, white, and gold. This combination evokes a sense of freshness, lightness, and reliability of the brand’s vehicles.

The most popular MV Agusta motorcycle released by the brand in the last years was the model, created in collaboration with a famous French Alpine company. It was a standard MV Agusta Superveloce 800 bike, which has received the luxury Alpine restyling, being painted in the traditional colors of the French brand, blue and gray. The project was aimed more at visual improvements than technical. A total of 110 of these MV Agusta Superveloce Alpine 2021 bikes were produced and sold out within hours.