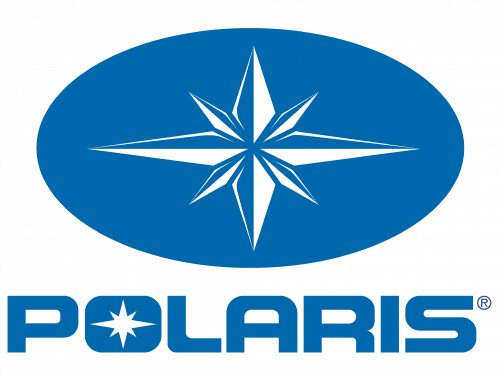 Polaris is the name of the American motorcycle manufacturer, which was established in 1954 by Edgar Hetteen and David Johnson. The company is mainly known for its all-terrain vehicles, which are considered to be one of the most powerful and reliable in the world’s ATV market.

The today-famous American company Polaris was founded in 1954 in northern Minnesota. At first, the focus of the company’s products was on snowmobiles, and for quite a long time Polaris holds a leading position in the global market of motor vehicles for winter recreation.

The history of Polaris began in 1954 when David Johnson and brothers Allan and Edgar Hetteen founded the Polaris Corporation, engaged in the production of the first snowmobiles. The company was named for its location in the middle of the United States (Polaris – north star).

Polaris Trail Boss is the company’s first ATV model, assembled in 1985. Thanks to the use of new at the time technical solutions, such as automatic Polaris Variable Transmission, MacPherson suspension, and disc brake systems, the ATV made a breakthrough in the American market of off-road vehicles. It became the benchmark for full-fledged off-road ATVs for many years.

In 1987, Polaris developed the first automatic all-wheel-drive system, AWD, and began equipping its ATVs with it. The system automatically locks the front wheels when extra traction is needed and disengages the drive if it is not needed.

In 1996, Polaris Sportsman SUVs became pioneers in using rear independent suspension. Such technical innovations, complemented with the quality of components, have greatly increased the popularity of Polaris all-terrain vehicles, and already in 2008, the company sold its millionth Sportsman model.

In 2005, Polaris introduced the standardization of optional accessories on Lock&Ride all-terrain bikes with interchangeable windshields, mirrors, handguards, and similar design elements. The Polaris mid-size ATV model was introduced to consumers in 2006. In 2007, ATVs began to be equipped with a rear convertible seat.

As of 2014, Polaris’s wide range of products includes snowmobiles, dirt bikes, motorcycles, and ATVs. Polaris is a relatively young manufacturer of motor vehicles, though its production and sales volumes are truly impressive. The turnover of the goods of the company Polaris to date exceeds 2 billion USD. Annually gets out of the conveyor more than 80 thousand units of products, which are exported to European, Asian countries, and South America.

The company’s products are one of the most recognizable around the world, which contributes to the continuous development of production and modernization of all processes – from design to construction assembly.

The main factory where Polaris is assembled is located in the United States of America. Polaris manufacturing includes the analytics, development, mechanization, welding, and product assembly departments. The company employs more than 3,000 people who are constantly testing and perfecting the products they manufacture.

Recently also started the production of motorcycle equipment assembly in Poland, which is also being modernized and undergoes all stages of reconstruction. 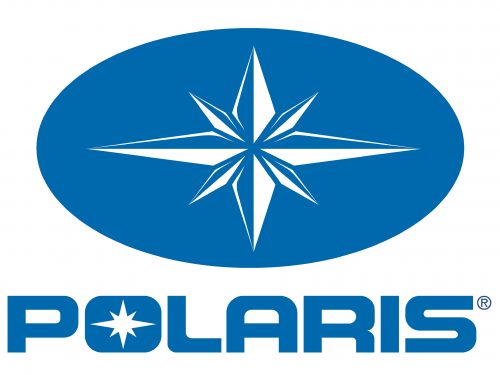 Polaris is a company, which has been very consistent with its logo. The badge of the American vehicle manufacturer is a graphical representation of its name, Polaris, which means Polar star. The logo is composed of a solid oval emblem placed above the black lettering with a stylized element in it. 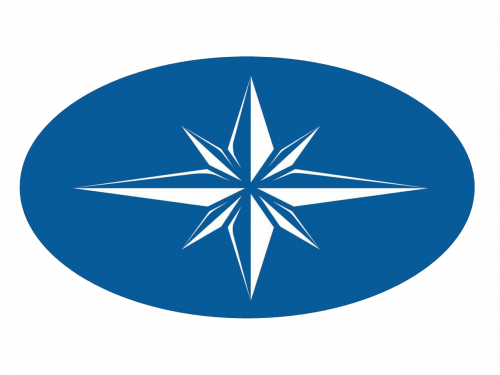 The Polaris symbol is a white eight-pointed Polar star, which has its horizontal lines elongated, balancing the stretched oval shape of the blue badge. The symbol looks modest yet fresh and elegant and shows the company’s character and professionalism, while the sharp angles and clean straight lines evoke a sense of progressiveness and value of innovations. 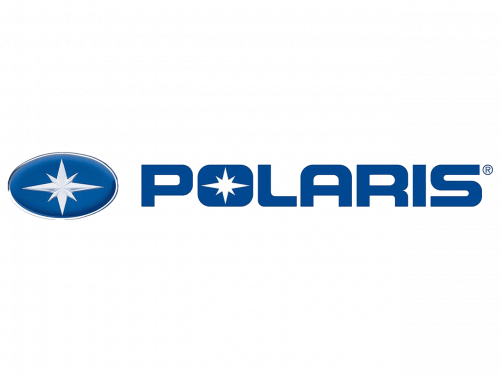 The capitalized and bold Polaris logotype is executed in a geometric sans-serif typeface with its massive letters featuring thick lines and softened angles. Besides the letter “O”, which was the company’s iconic polar star placed on it, all the other elements are written in a font, which is pretty similar to Corporatus Regular.

The blue and white color palette of the Polaris visual identity depicts the name of the brand and its essence. As the snow machines were the first vehicles the brand created, it looks very logical. This combination of colors also evokes a sense of reliability and professionalism of the American brand.

In 1985 Polaris Industries managed to make a real breakthrough with the first four-wheeled ATV in the United States, the Polaris Trail Boss, which was groundbreaking with technical solutions such as the Polaris Variable Transmission, independent MacPherson front suspension, long-stroke rear suspension, and disc brakes on both axles. With the release of this model, the ATV market saw a noticeable revival. Almost everyone who had an idea about ATVs dreamed of owning a Trail Boss ATV, which for a long time was considered the benchmark in the four-wheeled ATV class.