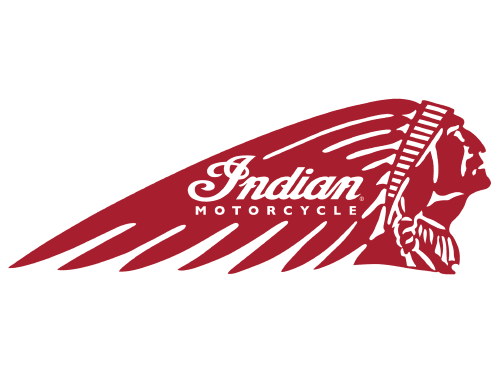 Indian is the name of an American brand of motorcycles manufacturer, which was established in 1901 in Massachusetts., by George Hendee and Oscar Hedstrom. The first name of the company was Hendee Manufacturing Company, which was changed to Indian Indian Motorcycle Manufacturing Company in 1928. The company repeatedly went bankrupt, but then the production of motorcycles under the Indian brand was resumed.

The history of Indian motorcycles began back in 1900, long before the appearance of Harley-Davidson, and the rivalry between the two companies led to a dramatic development, making America the leading country in motorcycle manufacturing in the early beginning of the last century.

George Hendee and Oscar Hedstrom, the founders of the iconic brand first founded the Hendee Manufacturing Company in 1900 as a partnership for the sale of motorcycles under the brand name “Indian”. In 1901, the first six motorcycles were produced, of which only three were sold. But this didn’t break the partner’s mood and intentions, and already 14 years later, the company became the largest manufacturer of motorcycles in the world, producing more than 30 thousand units, which was a record at the time.

Like many companies famous for producing bikes, this motorcycle brand began with the production of bicycles. In 1897 one of the names given to the original company’s products exported abroad was “American Indian”, shortened later to just “Indian”.

The idea of motorcycles production appeared already in 1900 and was implemented in 1901 when Indian Single appeared. Thus, it was this brand that gave America its first motorcycle, with a 260 CC single-cylinder engine rated at 1.75 hp and several innovations that consumers immediately liked.

Indian was one of the brands which did not suffer from two World Wars but benefited from them. The leading position in the production of military equipment during the First and Second World Wars brought fantastic profits to the company. Indian bikes were purchased by the U.S. government in large quantities, including for the lend-lease, so that the USSR also then became familiar with this pinnacle of motorcycle art. The Indian military line became famous for its reliability, power, and speed, but this success did not last long.

Though this military-oriented politics almost ruined the brand. Because Indian was kicked off the market by other brands, who worked on regular customers’ needs. The all-American motorcycle niche was taken by Harley-Davidson. Of course, Indians did not give up without a fight, as in 1948, an updated Indian Scout with a  440 CC engine was produced.

Since the late 1940s, Indian’s star began to fade, and its brilliant history came to an almost halt in the early 1950s. Motorcycles of this brand were still being produced, but the former tops were no longer to be taken. Subsequently, the company was repurchased by various people, until it finally went bankrupt in the 1970s.

Despite the poor state of the brand in the second half of the twentieth century, it did not completely disappear from the market, as British and Italian motorcycle labels used Indian names for their models. However, Americans did not give up the idea to revive the cult domestic brand, and the brand was bought by the Indian Motorcycle Company of America, which set up production of updated Indian Chief and Indian Scout at the old plants.

The real renaissance came when Indian Motorcycles were bought by Polaris Industries in 2011. The new owners went to great lengths to preserve recognizable features, including the emblem, the signature rear wheel skirt fenders, and the air-cooled twin-cylinder engine. Popular models were revived, the Indian Scout in two variants, several vintage motorcycles were released for classic motorcycle enthusiasts, and new names were introduced, such as the Indian Roadmaster. 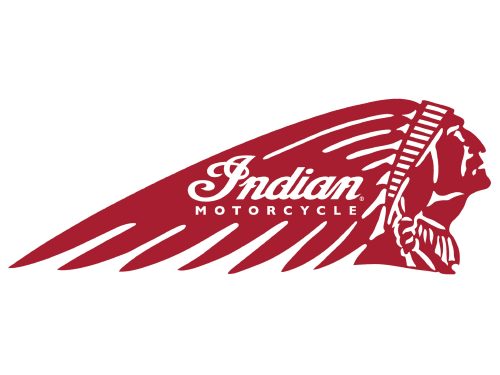 The iconic brand has not only its motorcycle models instantly recognizable across the globe can but also its logo, which has never been changed since its inception in 1901.

The Indian logo is a bright yellow and red badge with the image of the Native American man in profile turned to the right and looking up. The classy script lettering is written over his feathery headpiece.

Though the color palette of the logo has been changed throughout the years, and the logotype could be used on its own, the style remained the same and always made the brand stand out in the list of its competitors. 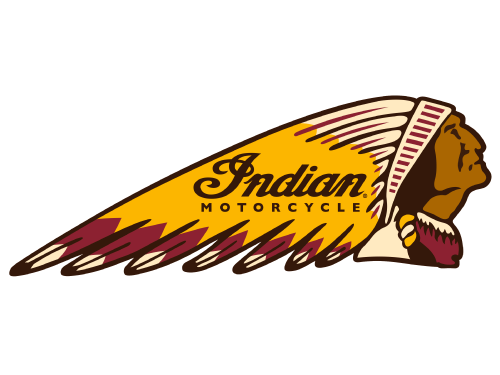 The symbol of the brand is a drawing of a Native American man, who looks proud and strong. The image, which can be seen in a yellow and burgundy, monochrome, or red and white color palette, looks exquisite and evokes a sense of professionalism and authenticity, showing the company’s values of legacy and traditions. 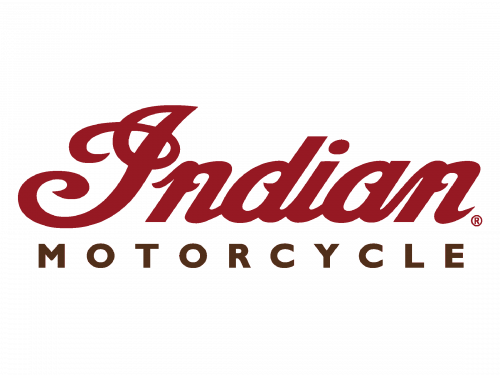 The Indian lettering from the brand’s official logo is executed in a custom script typeface with some Winnie details on its thick and sleek rounded letters. The first letter of the wordmark has its lines elongated and curved, making the whole inscription fancy and elegant.

Today the main color palette of the brand is based on burgundy and white, two colors that stand for confidence and reliability. They also make the logo memorable and bright, being a pretty rare combination among the motorcycle brands.

In 1919, the company began producing the Scout with a 606 CC and 11 horsepower, two-cylinder V-valve engine. The Scout had legendary reliability and became one of the most popular Indian models, being produced until 1949.

The Indian Scout and its modifications are probably the best-known models of the brand. With an engine displacement of 606 CC, a power of about 12hp, and a top speed of 90km/h, it appeared in its first version. And already in 1928, it was available with a 750 CC engine.