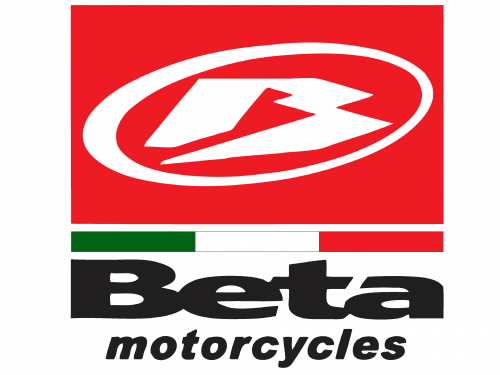 Beta is the name of a famous Italian brand of motorcycles, which is located in Rignano sull’Arno near Florence. Beta, or Betamotors, traces its history back to 1904 when the mechanic Giuseppe Bianchi opened a bicycle repair and sales workshop in Florence.

The company was founded in 1904 under the name Societa Giuseppe Bianchi and was engaged in the production of high-quality bicycles. In the early 1940s, the company, which by then had grown from a small workshop to a well-equipped machine factory, adopted the name “Beta” – after the initials of Enzo Bianchi, son of the company founder, and its technical director, Arrigo Tosi.

In 1948, the company started production of a motorcycle with a 50 CC two-stroke engine, located at the rear wheel, and with the drive on the tire rubber roller. The first full-fledged motorcycle appeared in 1950 under the name Ital JAP.

In 1956 Beta produced its first scooter, the Grillo. Soon the company was producing a large range of mopeds, motorcycles, mini-bikes, and small motorcycles with 50 CC two-stroke engines of its own making, and by the mid-1969s they had displaced full-fledged motorcycles from the production program.

In 1989, the company started manufacturing triathlon motorcycles, and this is when the Zero bike was created. For the first time on a machine of this class, liquid engine cooling and a diagonal frame made of aluminum alloy were used.

A new era in the history of the company came in 1993. The first modern scooter of Beta, the Tempo, entered the market. The machine, equipped with a 50 CC two-stroke engine, automatic V-belt variable speed drive, and 16-inch wheels, immediately won popularity. Soon the range expanded with off-road scooter Quadra and sport scooter Chrono, which appeared in 1994. Two years later, the Ark sport scooter was added to the brand’s portfolio. 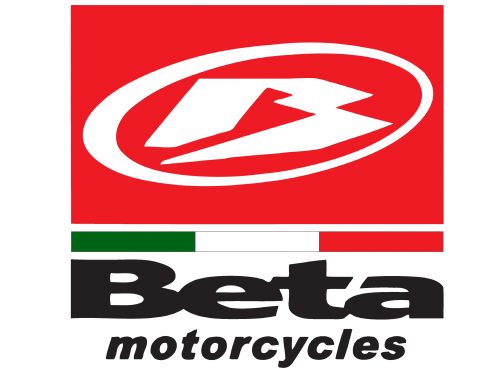 The visual identity of the Italian motorcycle manufacturer is strong and sharp. Composed of a bold and intense emblem, accompanied by the wordmark, the Beta logo looks progressive and powerful. Despite the simplicity of the idea and design, all lines of the company’s emblem are well-balanced and brilliantly reflect the outside and character of the brand and its audience.

There are two possible options of the Beta logo — a stylized white “B” in a circular outline, placed on a red background, with an underline in the Italian tricolor, or a monochrome version, which is more often accompanied by black two-level lettering under it.

The Beta symbol is a stylized and instantly recognizable letter “B”, which is hand-drawn and has its lines thick and geometric, with sharp angles, symbolizing strength and speed. The strict straight lines are softened by a smooth circular frame around the letter. 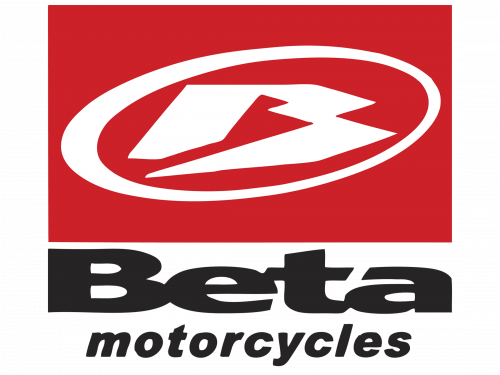 The Beta logotype from its official emblem is executed in a custom sans-serif typeface with extra thick lines and extended shapes. The letters of the inscription are glued to each other but do not look too massive, and the diagonal cut of the letter “T” adds sharpness and lightness. The closes font to the one from the company’s logo is probably Squat, but with some lines modified.

As for the “Motorcycles” part of the inscription, it is set in the lowercase of a modern italicized sans-serif typeface, similar to Vipnagorgialla Bold Italic.

The Italian brand uses two different color palettes for its visual identity — red and white, and black and white, which can sometimes be accompanied by the white red, and the green tricolor of the Italian flag. Both combinations look strong and passionate, showing the best sides of the brand and its dedication.

The main products of the company are sport motorcycles for trials. The Rev-3 series consists of machines with a lightweight aluminum alloy frame and a two-stroke liquid-cooled engine with a working volume of 125, 250, or 275 CC. The second important direction in the company’s activity is motorcycles for children’s sports: trial motorcycles Rev-80, Rev-50, and Minitrial, as well as cross-country series Minicross. Alp lineup ranks between enduro and trail bikes. Weta road motorcycle range consists of motorcycles RR Enduro 50, RR Enduro 50 Alu, Alp 200, Alp 4.0, Motard 4.0 as well as supermotards on their base. Jonathan 350 and Euro 350 cruisers close the motorcycle range. The company also produces a sports scooter, 50cc Ark, in different versions.